There’s a whole wide world of curry spiciness out there for Indian food. You have mild curries for the masses, moderate heat options for those that like a little sizzle in their meals, and some curries with no-doubt-mouth-fire heat. That’s where vindaloo masala powder sits. Its heat is not just noticeable – it’s the star of this curry spice blend. It’s why vindaloo curry powder is so well known for being among the spiciest curry mixes around.

Kashmiri peppers are the chili focal point here, and while this Indian red chili isn’t all that spicy on its own (1,00o to 2,000 Scoville heat units – less than a jalapeño pepper), there’s just so much of it in the powder that you’ll notice the spice. The heat, though, is really supplied by the additional cayenne pepper. You can bring this spice blend down to a little more moderate level just by cutting out the cayenne on its own. But if “too spicy” is a concern, you’re better off trying a milder option like Madras curry powder (see our recipe for that here).

This is a basic powder for near any vindaloo recipe – featuring spices like turmeric, cumin, and mustard seeds –  but feel free to experiment from here with more exotic spice flavors. Some vindaloo powders contain spices like cinnamon and cloves, for instance, so get your culinary creativity flowing. 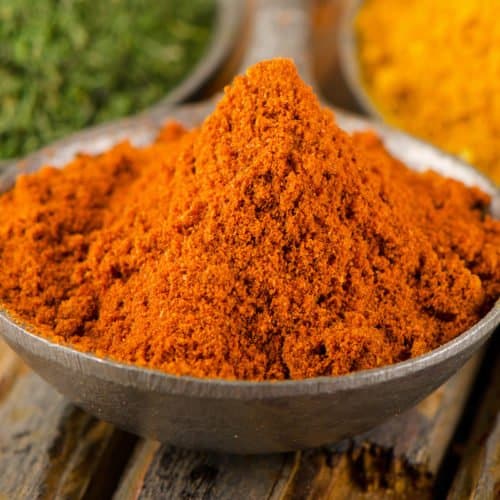 This is a basic vindaloo masala powder. It's a perfect base from which to experiment with additional exotic spices. For those wanting a more complex flavor, try adding small amounts of cinnamon, cloves, or cardamom to the mix (to name a few good options). Vindaloo curry powder is known for being spicy - hence the amount of Kashmiri chilies (and a small amount of cayenne) used. Kashmiri peppers are relatively mild on the Scoville scale (1,000 to 2,000 SHU) but since they are the primary ingredient of this vindaloo powder, the heat will be apparent.