With the spicy richness of cumin and cinnamon, along with the bright tang of lemon, this crisply golden, full-flavored Turkish roasted chicken is fall-off-the-bone tender. There’s a spark of serrano pepper in the chicken’s marinade, but the fire burns brighter in an absolute classic of Turkish cuisine – acili ezme.

Hot, sweet, and sour, acili ezme (or spicy ezme) is immensely popular throughout Turkey because it’s so deliciously versatile. It can be served as a salsa-like relish, a thick-ish sauce that happily doubles as a dip, or as a gloriously vibrant side salad.

So, how can such a simple mix of chilies, tomato, bell pepper, onion, parsley, vinegar, salt, and olive oil be so astonishingly good? Pomegranate molasses and sumac is the answer.

Now, that duo might not be staples in your store or cupboard, but they are absolutely worth seeking out. Add them to ezme’s pretty unremarkable ingredients, and you’ll be in for an almost magical experience. I say magical because the molasses and sumac are amazingly transformative. They turn what might appear to be very ordinary into something spectacularly special.

In her book, Persiana. Recipes from the Middle East & Beyond (affiliate link), Sabrina Ghayour says that with ezme, “Everyone seems to have their own recipe – some are spicier or less acidic than others.” Ours is generous with the chilies – nicely fiery, fresh, red serrano peppers, but light on the vinegar. That’s so that the magical mix of sumac and pomegranate molasses is encouraged to come center stage in the ezme.

The magic of acili ezme revealed

With a berry-like sweetness and a sharp, cutting, citrusy tang, the flavors of pomegranate molasses are similar to that wonderfully sharp, sour spice, tamarind. The bitter-sweet hit is not as strikingly intense as it is with tamarind, but a little still goes a long, long way.

The ‘molasses’ tag sort of implies that it’s made with sugar, but that’s not the case with the ‘real thing’. This is made from pomegranate juice that has been heated slowly, so it reduces to a flowing, syrupy consistency. Some brands do contain sugar as well as flavor and color ‘enhancers’, but the sort that’s worth finding only contains the juice in all its flavor-concentated glory.

The other partner in this magic trick is sumac. This spice is made from the dried, ground, purplish-red berries of the shrubby sumac tree. It has the rich, earthy flavor of slightly salty and peppery lemon zest that’s had its sharp, up-front tang toned down. Its lemony savoriness is warm and lingering, meaning its taste is more subtle than the immediate tartness of lemon juice or zest.

Together, this pair of unusual, special ingredients are the secret to the fresh, sweet-and-sour appeal of our acili ezme, which comes in the form of a chunky salsa.

To create its fall-of-the-bone tenderness, the chicken spends a few hours in a marinade built around buttermilk. Tangy and slightly acidic, buttermilk has long been renowned as a flavor-boosting, moisturizing marinade for chicken, particularly in the ‘Southern Fried’ style.

Ours gets a little fiery lift from chopped green serrano peppers, and its mellow spiciness comes from cinnamon, cumin, and paprika. Garlic and lemon have always made delicious partners for chicken, and they both feature here in generous amounts. That’s especially true of the lemon, with all its zest, flesh, and juice working in harmony with the ezme’s range of bright, citrus flavors.

The marinaded chicken is roasted in a hot oven with a rubbing of salt, black pepper, and olive oil. What’s great about this is that the buttermilk acts as moisture protector, keeping the meat’s juicy, succulent flavors as the skin turns wonderfully crisp and golden in that hot oven.

The result? Well, you get two sets of delicious contrasts in terms of tastes and textures. First, the crisped skin is ultra-savory, nicely salty, and warmly spiced. And then, the succulent meat is packed with the sweeter, deeply mellow tastes that you’d expect from a high-class, free-range chicken.

And to serve alongside: potatoes roasted with orange zest and sumac

Just like the ezme, this is another delight inspired by Sabrina Ghayour. I was attracted to it because I’m a big fan of potatoes that are roasted along with the likes of onion, garlic, and a seasoning of, say, paprika, black pepper, and salt.

That type of combo is so appealing because the potatoes become infused with the flavors of their companions as everything steams under a covering of foil in a hot oven. And then, uncovered, the potatoes finish roasting to a wonderful outer crispness.

In this distinctly Middle Eastern variation, the potatoes cook with a sparse coating of olive oil mixed with a little sumac and the zest of an orange. Whole cloves of lightly crushed garlic join the party, along with a few sprigs of fresh rosemary and a sprinkling of salt.

Distinctly Middle Eastern? Oh, yeah. The potatoes are aromatic, earthy, and savory, but they also have a subtly sweet undercurrent of tartness from that mix of orange zest, sumac, and rosemary. And that means their flavors and aromas make perfect partners for the richness of the chicken and the bright intensity of the acili ezme. 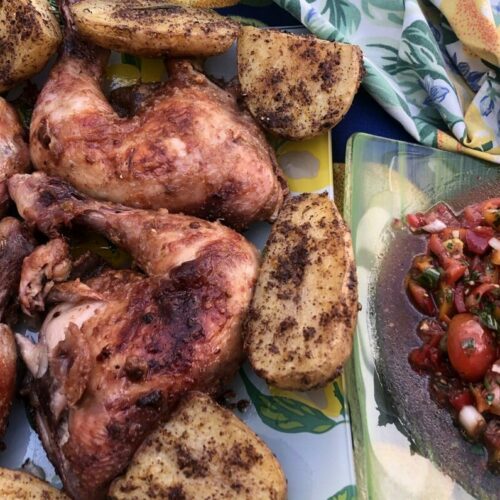 For the chicken’s buttermilk marinade

For the acili ezme – spicy ezme

For the orange and sumac roasted potatoes

For marinading the chicken

Roasting the chicken legs and the potatoes