In these Turkish treasures, a super-savory, juicy mix of beefsteak, onion, tomato, and bell pepper comes cupped in boat-shaped, crusty flatbread. Spiced with cumin and paprika, that full-flavored filling gets its fiery kick from thinly sliced cayenne peppers.

Called *pide (*pronounced a bit like pea-day), these handsome beauties are immensely popular throughout Turkey.

And if you’ve never tried them, you’re in for a rare and special treat. Rare and special? Oh, yeah. They’re astonishingly good in ways that may well have you wondering how something this simple can be so sensationally delicious.

You’ll likely also appreciate why pide are so adored in their native land. In his cookbook, Turkish Delights (affiliate link, folks), John Gregory-Smith says, “This style of snack food is found all over Turkey, and is loved by all ages.” No wonder.

On its own, the flatbread for the generously loaded ‘boats’ is easily good enough to go alongside, say, a juicy curry or your favorite bowl of Tex-Mex chili. As a standalone flatbread, it’s served in Turkey much like pita breads, and is enjoyed as a partner to a whole host of different foods.

For our pide recipe, the flatbread has a satisfying, crisp-baked crunch on the outside, with a much softer inner texture. I’d put that texture somewhere between a slightly flaky, puffy naan bread and a nicely dense, fairly chewy pita.

And then, things just keep getting better when you get to your flatbread’s cargo.

Pide fillings don’t vary much. This makes me think that a few trusted variants have an established, much-loved appeal that sticks to the sensible mantra of if it ain’t broke, don’t fix it.

The headlining ingredients in these fillings include a spicy beef sausage known as sucjuk; chopped or ground beef; cheese with spinach; chopped or ground lamb; and pastirma, which is a type of salted, spiced, and dried beef that’s served thinly sliced.

There’s also a combo of these popular fillings, called a karisik pide, a mixed pide.  And sometimes there are eggs. Moments before it finishes baking, your preferred pide can have an egg gently cracked into its center.

Our recipe is for kusbasili pide, meaning a chopped meat pide. I went for a beef filling with cubed rump steak as its star.

The list for the rest of the filling is short – cherry tomatoes, onion, and green bell pepper. For a rich, fiery spiciness, there are some red cayenne peppers, paprika, and cumin. Add a seasoning of salt and black pepper, and a little olive oil for gently frying the filling, and that’s it. The list is complete

As they’re lightly fried, the steak, onion, and tomatoes release enough of their lovely juices to hold the fairly chunky filling together when the loaded pide gets its hot-and-fast baking.

Of course, you could use whatever takes your fancy for the filling. And this idea of ‘anything goes’ when it comes to flatbread toppings has already been taken to dizzying heights by the numero uno of takeout foods, pizza.

Pizza has to be one of the best-known foods on the planet. So, it makes perfect sense that something fairly similar, like pide, often gets compared to pizza. Fair enough.

But pide and pizza only share a couple of similarities. And that’s really significant, because what I like best about them are the ways they’re so different to pizza.

But before we get to those distinctions, let’s look at their similarities.

Pide vs. pizza – the similarities

It’s easy to see why pide is often called ‘Turkish pizza’. But that strikes me as being a bit like saying that pizza is ‘Italian pide.’ Obviously, it isn’t.

I mention that thing about ‘Turkish pizza’ because the major similarities between pide and pizza spring from just two fundamental characteristics.

First, they both feature a flatbread that’s used as a carrier for other ingredients – the filling or topping.

Second, pizza dough and pide dough usually contain the same ingredients. That’d be flour, yeast, water, salt, sugar, and olive oil. Now, I know that some pizza bases, like the classic Neapolitan, don’t feature olive oil and sugar, but most bases do.

And that’s where the big similarities end. From there on in, it’s all about differences.

Pide vs. pizza – the differences

The clearly obvious difference is how a pide’s oval-shaped flatbread is formed into a sort of ship’s hull that gets generously loaded with an inch or so of filling just before it’s baked.

Now, purely in terms of the quantity of filling – and how it’s held in place – I reckon a pide is a bit like a Chicago-style, deep-dish pizza where the high-edged base creates the necessary space for lots of filling. Having said that, a big difference here is that a pide is baked on a flat oven sheet. And that means you could think of its entire flatbread hull as being a sort of edible baking dish.

And with pide, there’s no sauce. That’s right. In ours, the filling gets all the glorious juiciness it needs from the steak, onion, and tomatoes.

Finally, there’s an essential finishing touch to complete the list of differences. The sides of a pide get a big boost of golden color and deep, rich flavor from something that’s not routinely associated with pizza: lavish amounts of melted butter.

This gets brushed on as your pide is about to hit the oven and is brushed on again as it comes out ready to be served hot, glistening, golden, and astonishingly good.

And to serve alongside? Cacik

Quick and simple. That’s Turkish cacik. It’s a chunky, cool relish with cucumber, yogurt, mint, and garlic. Cacik can be served in various ways, sometimes as a chilled soup or a drizzle-on dressing, but ours is a satisfyingly thick and chunky relish.

You cut some cucumber into third-inch cubes and mix them with thick-and-creamy yogurt, chopped fresh mint, and a little finely chopped garlic. Season with salt and lemon juice, and your relish is ready to serve.

With its bright, fresh, and slightly sour, tangy flavors, this relish adds a lovely contrast to the beefy richness and fiery spiciness of our pide’s filling. And the creamy, soft crunch of the cucumber is a real winner with the crisp crunch of that beautifully buttery flatbread. 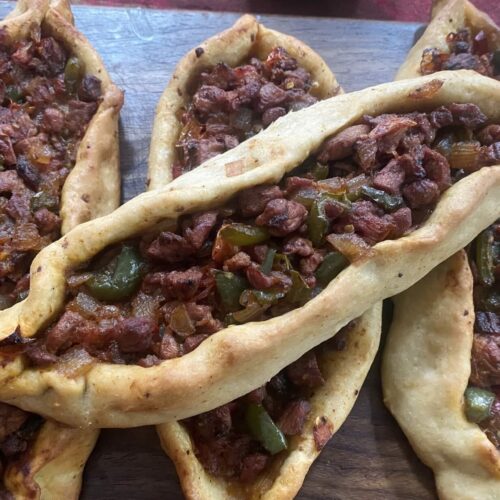 For the flatbread dough

For the beefsteak filling

For the cacik relish

Rolling the dough and prepping the pide ready for baking

Choose a steak with a nice strip of fat running along one side. That’s important because it’s going to be sliced off, finely chopped, and then fried until crispy and the fat melts out. Together with the crispy bits, that lovely fatted oil is what you’ll be using to gently fry the cubed, lean meat, onions, tomatoes, bell pepper and cayenne peppers. Learn how to properly knead by watching this video from the folks at The King Arthur Baking Company.