Do you love vinegar-forward hot sauces with lots of flavor and a mild heat that you can go ham on all day? Welp, you have a BFF (in hot sauce form) in Trappey’s Louisiana Hot Sauce. Trappy’s is a mild sauce that provides tons of Cajun flavor to any meal. And that vinegar tang? It keeps those taste buds alive. It’s a hot sauce for everyone, and you can use it on near everything. But is there more than vinegar taste here? And how does its heat really stack up? Let’s dive into Trappey’s. 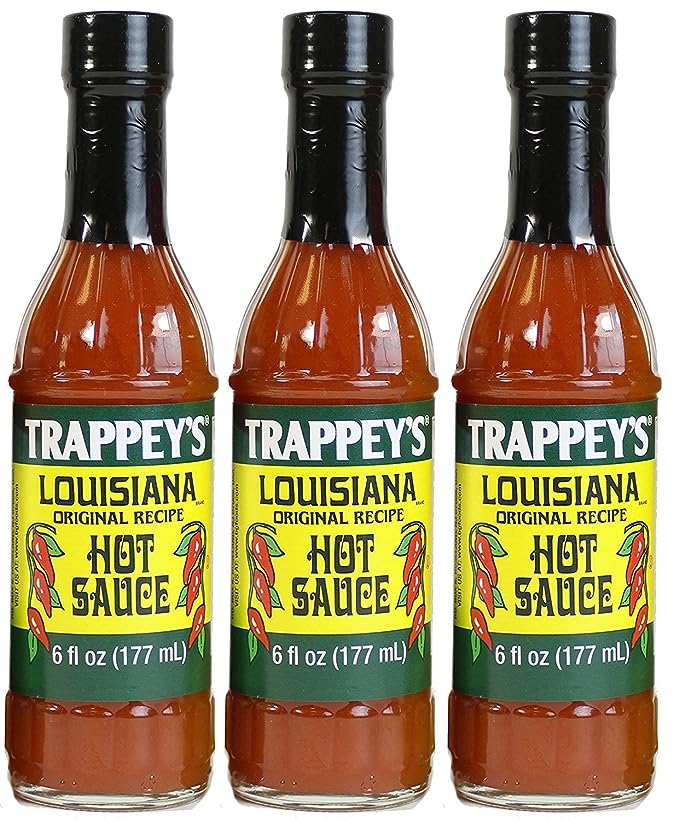 Trappey’s Louisiana Hot Sauce is like an amped up Cajun sauce, big on vinegary flavor and salt, but light on heat. That lower heat, though, makes it very usable.

Trappey’s is chock full of vinegar tang. It’s very vinegar forward, more so than other Louisiana hot sauces I’ve tasted. It’s likely the mix of both vinegar and ascorbic acid together, as ascorbic acid has a bitter sour taste that’d really enhance that tang. So if you absolutely love vinegar-based hot sauces, this is about as big as you get.

This is also a hot sauce that’s not for those looking for low sodium. It’s big on the salt: 115 mg per serving or a whopping 5% of your daily allowance. Compare that to Tabasco Original Red Sauce at 35 mg, or 2% of your daily balance. Yeah it’s a lot. Tabasco isn’t exactly low sodium either, but Trappey’s makes it look like it.

From my first taste, that vinegar and salt makes the insides of my cheeks scream out for more. That’s followed by a very mild peppery taste on the backend. It’s that simple one-two combo that works so well and tends to be very addictive. It’s a Louisiana hot sauce, so you know what you’re getting, but it just tastes, well “amped up.”

Trappey’s doesn’t list its pepper type on the label for its Louisiana hot sauce, but you don’t need to know to understand that this is a mild hot sauce. This will never go past an upper-mild heat (roughly 1,600 Scoville heat units, maybe lower), no matter how much you use. Among other popular Cajun hot sauces, it sits somewhere between Original Louisiana Hot Sauce (roughly 450 SHU) and Tabasco (2,500 to 5,000 SHU). As a fresh pepper comparison, think of it as roughly same heat as a fresh poblano pepper.

The mellow heat makes this family-friendly in that regard, but as for balance it feels a little underpowered for how amped up the vinegar and salt are here. I’m not saying it isn’t tasty – it just feels like it could be a bit more.

Like most Louisiana-style hot sauces, Trappey’s is about as usable as it gets. It makes a perfect dipping sauce for potato chips. It’s killer on eggs, popcorn, wings, chicken, rice, veggies, salads… the list goes on. And it’s mild enough that near everyone in the family can get into the action.

For the life of me I’ll never understand why this comes with a stopper. I know, most Louisiana hot sauces are dashers, but you won’t want it there. For vinegar and salt fans, this is the kind of sauce that you want to pour out.

Trappey’s is more collectible than other Louisiana hot sauces on the market for one simple reason: It’s harder to find. It doesn’t sit on store shelves as often as Tabasco or Louisiana Hot Sauce do. So in that way it’s a talking piece. It’s something a little more exotic because of its rarity. That said, this sauce is well do for a little more visibility, so share it well and often with your friends.

Trappey’s Louisiana Hot Sauce is like an amped up Cajun sauce, big on vinegary flavor and salt, but light on heat. That lower heat, though, makes it very usable.

It’s a good day. I do from reading a very nice review of my favorite hot sauce to following a hilarious actor on Twitter. Kudos to you Tara!