Tarongia pairs a flatbread (that’s wonderful enough to enjoy on its own) with a topping of sun-dried tomatoes, pecorino cheese, anchovies, green olives, capers, red onion, fennel, and red serrano peppers. It’s like tasting the sunshiny essence of Sicily.

In the world of pizza-like delights, tarongia stands out as being extra special because the base is every bit as good as the top. And that rare, standalone merit comes from the ingredients in the exceptional flatbread and how you cook it.

As you’d expect, the dough for a tarongia’s crust is made with flour, yeast, water, and salt – the same sparse ingredients you’d use to create the base for a classic Neapolitan-style pizza. But, for tarongia, the dough is enriched with honey, red wine, olive oil, and all the tangy zest from a good-sized lemon.

As to how you cook it, well, before it gets its topping, the base is completely ‘sealed’ by being fried hot-and-fast on both sides in olive oil. The underside gets a little more heat to turn it crisply golden and to give it a few spots of light char. You then layer on the filling and finish the tarongia quickly under a hot broiler or grill.

This combo of fast frying and grilling means the base of your tarongia really is a ‘crust’ and its topped center doesn’t turn unpleasantly soggy.

There are plenty of intense, salty flavors here coming from the anchovies, capers, and the essential pecorino cheese. But that salty hit is mellowed by the rich sweetness of the sun-dried tomatoes, the red onion, and the mild, sweetly aniseed-like taste of the fennel.

So, why pecorino cheese in particular? Made from sheep’s milk, a good, pale yellow pecorino should be pretty hard and dry like Parmesan, but have a noticeably sharper, saltier tang to it. It’s grand in a tarongia’s topping because it really highlights the strong character of all the other flavors.

Same goes for the green olives, as opposed to riper, milder-tasting black olives. They’re here to act as powerful reinforcements, emphasising the balance between your tarongia’s blend of potent and subtle tastes.

As for the serrano peppers, fresh red ones play two different roles. First, a couple of them get finely chopped and gently cooked along with the fennel, onion, and tomatoes in a little olive oil. These add a pervasive, warm depth that flows right through the topping. And then there’s a far more immediate, brighter heat that comes from a pair of serranos that are sliced into 1/4-inch disks and scattered over the toppings just before the tarongias go under your hot broiler or grill.

In his cookbook, “Moorish”, chef Ben Tish explores the flavors of the southern Mediterranean and tells how the region’s cuisine is still heavily influenced by ingredients and techniques first introduced some 1300 years ago by colonizing Berbers from North Africa and Middle Eastern Arabs – collectively known as the Moors. Moorish: Vibrant Recipes from the Mediterranean
$33.05
Buy Now
We earn a commission if you click this link and make a purchase at no additional cost to you.

Our recipe for tarongia is inspired by the one in ‘Moorish’, and we’ve added two items that feature in a great deal of Sicilian cooking, olives and capers.

Olives have been harvested on Sicily for about 4,000 years, so using them here is backed by a lot of history. Not only do they add another dimension of distinctive flavor to our tarongia, they also bring in some nicely contrasting color and texture.

And the Aeolian island of Salina off the north eastern coast of Sicily is famous for its capers, and they’re regularly referred to as being the world’s finest.

Not being able to find any of those, I used some I already had – from Spain and packed in mild, briny vinegar. And I especially liked the tart, almost mustard-like pepperiness they added to the topping.

Toning down the saltiness – if that suits you better

This is really easy to do if you feel things are going to be too salty for your taste. They weren’t for the good buddy I enjoyed this with, but we do like salty food.

To drop those levels, gently rinse the anchovies and capers in a little milk and then let them drain before you use them. 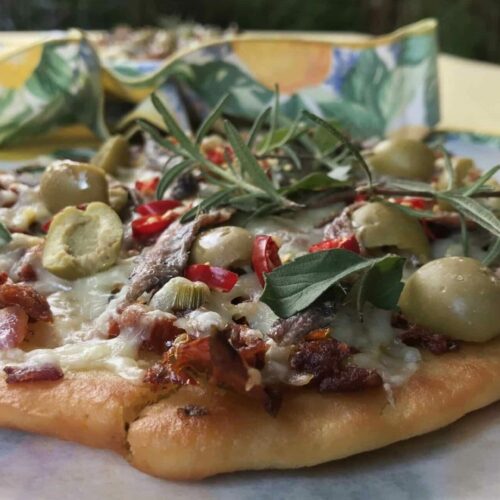 Topping and grilling your tarongias