This is where super spicy meets satisfyingly simple. Rich with tomato, onion, and classic Indian spices, our spicy masala eggs are fired by cayenne peppers and brightened with lemon juice. Those big-hitting flavors are paired with the creamy, softly spiced, rice-and-lentil delight called khichdi.

If you combine cumin with cinnamon, coriander, green cardamom, and cloves, you’ll have the five-fold essence of one of India’s best-known and widely used spice mixes, masala.

I say you’ll have the essence of the mix because there are many combinations of spices that can be used in a masala blend. The variations include additions like nutmeg, fennel, mustard seeds, garlic, turmeric, tamarind, star anise, and even saffron.

Other spices and herbs frequently added to the essentials are bay leaves, fresh ginger root, and black pepper. For the foundations of our masala sauce, those are the extras we’re bringing in to build on the deep, savory flavors of gently fried-and-simmered onions and tomatoes.

Black pepper, ginger, and bay leaves all fit into the category of being familiar seasonings. Fenugreek? Not so much.

Ground fenugreek seeds often give Indian curries their typifying taste of India. So typical that I’ve heard it said that fenugreek tastes like curry powder.

That observation really does ring true. In her cookbook, The Spice Tree: Indian Cooking Made Beautifully Simple, Nisha Katona says that using fenugreek ‘will give a dish that instant curry house hit’. She’s such a fenugreek fan that she ranks it in her favorite, top-five Indian spices. The Spice Tree: Indian Cooking Made Beautifully Simple
$20.95
Buy Now
We earn a commission if you click this link and make a purchase at no additional cost to you.

Now, straight from the pack, ground fenugreek can taste harshly bitter. But, as it cooks, the bitterness mellows considerably to something akin to the burnt-sugar taste of blackstrap molasses. And that’s joined by a nutty undercurrent of vanilla-like sweetness that’s often compared to maple syrup. For me, in this sauce, fenugreek is a bitter-sweet, must-have ingredient.

Once it’s simmering away, the sauce’s boldly spiced, tomato-and-onion base is enriched with caramelly dark brown sugar and receives a fair blast of heat from fresh, thinly sliced, red cayenne peppers. Then, right at the end of its slow simmer, the sauce gets plenty of tart lemon juice to give all its bold flavors a sharp, bright boost.

The wonder of khichdi is that it’s so reassuringly nourishing and soothing. Adored right across India, it has a long-standing reputation for being deliciously good for you as a sort of gentle, tasty dish of concentrated kindness.

Although rice, lentils, and ghee (a.k.a. clarified butter) lie at its heart, khichdi comes in many different guises. It can range from particularly plain-and-simple, right up to party-time lavish, and it has a variety of names, like khichri, kitchari, and khechudi.

As for the mightily nurturing appeal of its texture, khichdi is like a creamy, sticky, dense-ish risotto. And since ours is being paired with such a powerfully flavored sauce, we’re keeping it comfortingly mellow, and only spicing it with a little turmeric and cumin as it cooks.

Those two oh-so-Indian spices are added to finely chopped onions as they slowly soften in buttery oil. All that then remains to do is add the rice, lentils, a few vegetables and slowly cook the lot in some salted water. Once the water is absorbed by the rice and lentils, your khichdi is done. It’s that deliciously simple.

For the vegetables, I went for bite-size cauliflower florets, roughly diced carrots, and bright green garden peas. But, since khichdi is such an adaptable, make-it-how-you-like-it dish, you could happily swap any of those for, say, sweetcorn, snap peas, waxy potatoes, or green beans.

Aside from being so satisfyingly down-to-earth, khichdi comes with another bumper bonus, it’s a glorious companion for so many other seriously hot and spicy dishes.

No matter how I was serving it, what I’d certainly add are some thin, garnishing slices of fairly mild, fresh chili. Green serrano peppers fit the bill because their crisp, nicely warming bite emphasizes all the delicate tastes of the khichdi.

And speaking of garnishes, the fiery, rich masala sauce is just grand with a scattering of cilantro and a little fresh lime juice squeezed over it.

The elegance of simplicity

The ingredients for our masala eggs with khichdi are pretty commonplace and making it all is really simple, but there’s a bonanza of very different tastes and textures in this dish that come together with plenty of laid-back, good-looking style.

And that’s what puts it into a rather unusual class – it’s a simple enough dish for every day, and elegant enough for a special one. 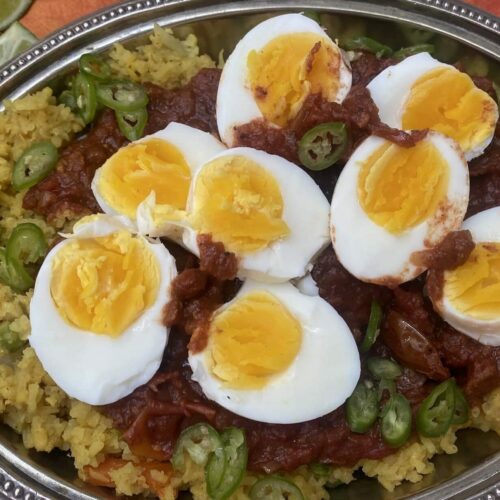 For the masala sauce

Soaking the rice and lentils

On the eggs: Eggs vary. That means that the results of boiling them also vary – mainly due to their size and how old they are. And the thing about boiled eggs is that you can’t see when they’re ready, as you can with, say, fried or poached eggs. Mostly, my eggs are the store-bought, free-range variety. I look for the freshest according to the date on the pack, usually go for ‘large’, and I don’t keep them in the refrigerator. So, that’s what I mean by fresh, large, room-temperature eggs. The instructions above are how I (almost always) get an easy-to-peel, hard-boiled egg that still has a little softness in the yolk’s center – as opposed to it all being sort of crumbly-hard.