Chilies, garlic, ginger, and cumin. That’s a fab foursome for fans of fine, fierily spiced food. And it’s a combo that highlights the full, front-and-center flavors in this spicy Chinese beef with cumin recipe. It’s a deliciously simple, yet intensely rich dish.

This is very much a showcase for the success of simplicity. Except for one outstanding virtue, everything about this spicy beef with cumin recipe is minimal — the ingredients, the prep, and the cooking. And the virtue? Well, it’s a major one. The big, bold aromas and flavors will delight you all the way from your very first taste, right through to your last.

For sure, there’s plenty of fire here — thanks to a plentiful blend of fresh red cayenne peppers and whole, dried bird’s eye chilies. While that type of heat is a distinctive feature of Hunan cuisine, this is definitely not a one-dimensional dish dominated by big burn. Although the list of ingredients might be minimal, they’re all used in generous quantities. That means the other three members of the potent foursome each make their own complimentary and noticeable contribution to the centerpiece pleasures of the velvety, tender beef.

And that balance of strong, very distinctive flavors brings us to something which may well strike you as bit of an oddity in a Chinese dish — the cumin.

Cumin might not be a spice that first springs to mind when you’re thinking of Chinese food. It’s a flavorful cornerstone in many great Indian dishes, and it plays a big part in the cooking of the Middle East and North Africa. But, China?

Well, that also surprised me until a few years ago when I read Fuchsia Dunlop’s recipe for beef with cumin. Now, Ms. Dunlop is a widely respected, much awarded Chinese cookery writer, and was apparently mightily impressed by this dish at a restaurant in Hunan’s capital, Changsha. In fact, she was so impressed that she featured it in her 2006 book, Revolutionary Chinese Cookbook: Recipes from Hunan Province (affiliate link, folks).

Her praise for cumin with beef makes perfect sense — it’s routinely one of the first spices I look for when making a dry rub for meats I want to grill or bbq. Cumin adds an immediate, earthy, slightly peppery warmth that quickly mellows out as the flavors of the meat shine through. And that’s especially true when the flavors in question are coming from slices of a thick-cut, first-class slab of rump steak.

And then there’s the soy sauce

If cumin isn’t fully mainstream in Chinese cuisine, soy sauce certainly is. Our cumin beef recipe features the two most common variants — light soy for the strength of its salty, umami flavor, and a little less dark soy to give the dish a richer, deeper color.

The two types of soy are paired with rice wine vinegar to create a quick marinade for the beef. When mixed with a little more water, the marinade then becomes the sauce for your cumin beef. The rice wine is fairly astringent and adds a cleansing edge that cuts into the dense savors of the soy. And that contrast brings yet more balance to the strong, insistent tastes of the fab-four spices.

The beef’s sauce is finished with a generous glug of sesame oil. It features more like a last-minute condiment, rather than being used to cook anything. Because it’s added to the sauce just a few moments before serving, its subtle, slightly musky smokiness is clearly retained.

To serve alongside this spicy Chinese cumin beef? Rice. Plain and simple. It’s the ideal, wonderfully calming companion for a dish that’s so alive with such immense tastes.

My rice recommendation? Jasmine. Cooked until it’s just slightly sticky, jasmine rice has a sweetness that sits perfectly alongside the spicy, salty heat of the beef. 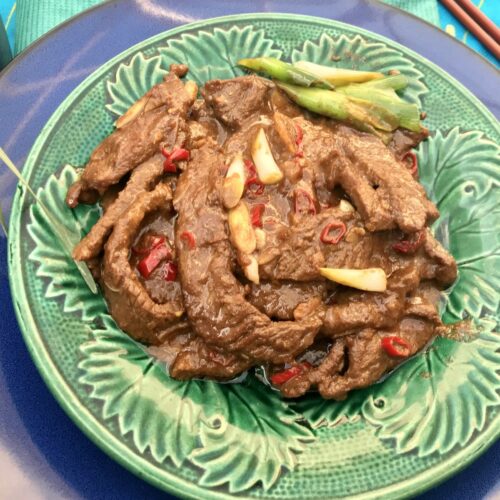 Marinade for the beef

Making the marinade for the beef

Cooking your Chinese beef with cumin

Is cornFLOUR the same as cornSTARCH?