What could be more perfect on a cold winter evening than a large bowl of spicy chestnut soup? This is a hearty bowl, with delicious chunky pieces of chestnut and the salty delight that is crushed bacon bits. It’s earthy, meaty, nutty, and fiery all in one.

On that chili pepper, our recipe calls for just one red chili. Of course, use as little or as much as you’d like in the recipe, depending on your heat tolerance. I recommend red jalapeño pepper as an excellent option here. Its medium heat gives just enough spice and it’s sweet enough (with nice bright undertones) to give the spicy chestnut soup some additional depth.

You can double up on the chili for extra spice. Or try a quarter to a half teaspoon of ground added to the soup. It adds an additional dimension of flavor with its smokiness (as well as cranking up the heat.)

Remember, there’s already ground black pepper in the recipe, so there’s already some warmth in the soup. It’s best to add small amounts of chipotle and taste to get the right balance. That’s much harder to do with the fresh pepper as it’s added to the chili chestnut soup while cooking (and then simmered, reducing the amount of water and intensifying the heat.) It’s much harder to gauge than adding a ground chili into the mix post-blending.

This delicious soup is one you’ll return to cooking again and again, especially because it stores really well. You can reheat it for up to four days after cooking, as long as you keep it refrigerated and in an airtight container. 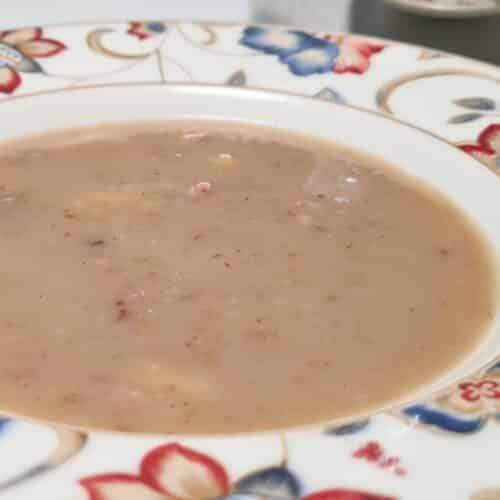