The English county of Cornwall meets the Mexican state of Hidalgo — 200 years of fab food fusion.

Surprisingly, they’re a twist on the oh-so traditional meat-and-potato Cornish pasty. In the mid-1820s, these substantial pies were introduced to the silver-rich regions of Hidalgo by world-renowned mining experts from the tin-rich regions of Cornwall. If you’re interested in that weirdly curious piece of mining-meets-food history, there’s a lovely summary of it all here. And those Cornish miners left another rather startling legacy. They introduced Mexico to what has become the world’s most popular sport — soccer.

Throughout South America, there are multiple variations on the theme of small, half-moon pies that are widely known as ‘empanadas’. These reflect Spain’s broader reaching, pan-continental influence, and the ubiquitous name derives from a Spanish term for foods that are encased in bread.

Great as a party-time starter or for cocktail-hour appetizers

Our Hidalgo-style spicy beef empanadas are certainly smaller and daintier-looking than a chunky Cornish pasty. The pastry rounds which cover that super-spicy filling are only 4-1/2 inches across, and they’re rolled a lot thinner than the far more robust Cornwall crusts. There’s also a little olive oil in the dough, which gives it a glossier finish and lighter texture than a pasty’s workman-like walls short crust.

After all, ours aren’t supposed to be a sort of highly practical, edible lunchbox for miners who were spending their hardworking day underground. They might be fairly substantial snacks, but they’re not intended to be an entire meal.

And, even as a Brit, I’ll happily admit that the Mexican version tastes way better than its far more one-dimensional and comparatively bland English counterpart. For sure, the Cornish certainly got things off to a flying start with the basics. But it took some Mexican flair to transform this adopted pie it into a five-star treat.

Choosing the beef in your spicy beef empanadas

Beef is the centerpiece here, so it makes sense to choose wisely. Many recipes — from both sides of the Atlantic — suggest keeping things authentic by using a cut like skirt or chuck steak. This puzzles me a bit. Why? Well, that choice would be about right to replicate the type of pasties first introduced to Hidalgo all those years ago.

But that’s not at all what we’re aiming for here. We’re looking for something quite different, something that’s bursting with exciting, rich flavors. And the steak to do that is a fine piece of tender sirloin with a thick, flavor-full rim of fat all along one side. When it’s coarsely ground, that fat should account for about 15% of the steak’s weight.

And there’s another very good reason for choosing sirloin for our spicy beef empanadas recipe — it cooks far more quickly than those other cuts, giving you all the juicily beefy flavors of a fine, medium-rare steak. Which is precisely what these empanadas are all about. 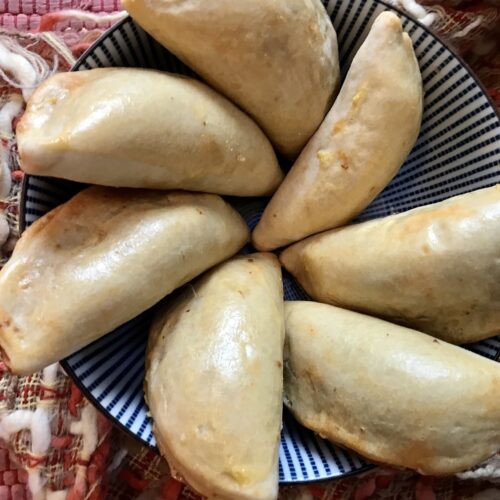 Assembling and baking the empanadas