The bright flavors of smoked paprika, garlic, and vinegar emphasize the glories of ripe tomatoes in this Spanish gazpacho recipe. Mellowed by cucumber, olive oil and the sweetness of red and yellow bell peppers, this gazpacho takes the whole concept of chilled soup to a higher level.

The reason gazpacho stands alone as a soup supremo is that nothing else tastes even vaguely like it. And there is a mystery here that is hard to fathom. It’s a mystery whose complexity is made all the more baffling by the question that underlies it. How can such simple ingredients create something so extraordinary and so enjoyable?

“You are meant to enjoy the results without knowing why.”

That quote about gazpacho comes from The Cooking of Spain and Portugal (affiliate link), a Time-Life book from 1969 that was part of a 27-edition series called Foods of the World. It’s an observation that makes sense because it’s based on one of the few certainties about gazpacho — there isn’t an absolutely definitive recipe for it, and there are no set-in-stone rules to govern the ingredients or their quantities.

Definitely, there are some long-established, tried-and-tested guidelines that are common to most recipes, and our version sticks to those guiding principles — with the sole goal of ensuring that, above all else, you’ll enjoy the results.

Five foundational ingredients at the center of great gazpacho

And then there are the typically Spanish keys that unlock these base flavors — smoked paprika, sherry vinegar, and red onion. These give gazpacho a smokily sweet spiciness and a subtly contrasting, freshening tang.

Not surprisingly, that vibrant mix of flavors has prompted some of the most respected food writers to rave about gazpacho — and to share their particular way of making it and serving it. For example, in her 1942 book, How to Cook a Wolf (affiliate link), MFK Fisher reckoned that offering gazpacho was an especially good way to sharpen bbq appetites and put a glimmer in the conversation.

I’d agree with Ms Fisher about gazpacho being a grand starter, but I always feel a bit disappointed when it’s served that way. For me, gazpacho deserves to be an entire meal in itself, so that’s the leading role our gazpacho plays, with a supporting cast of tempting, savory sides.

A chili salsa, some crisply golden croutons, and hard-boiled eggs mixed with anchovies

All the members of this cast are enjoyed like condiments. By adding just a few heaped teaspoons at a time to your bowl of gazpacho, they each bring a different dimension to its flavors and textures.

Chilies and tomatoes always go so well together, so I’d highly recommend the following. Finely chop a few fresh red and green chilies — two medium-sized cayenne peppers of each color will be just dandy — and mix these with two diced scallions (or half a red onion if you prefer) and a tablespoon of olive oil. Season to your taste with ground sea salt, and you’ll have a fiery, crunchy salsa.

For a complete contrast of textures, crisp golden croutons are heaven-sent with gazpacho. So, cut four slices of stale white bread — crusts and all — into ½-inch cubes, and then fry these hot and fast in two tablespoons of olive oil.

My final choice for these almost tapas-like adornments would be two, roughly chopped hard-boiled eggs gently mixed with six or so anchovy fillets, each cut into 1/8-inch slivers. If you like black olives, you might want to halve a few and add them to the mix.

A word about your Spanish gazpacho’s texture, temperature, and some optional garnishing

My firm preference is for a gazpacho that’s not one-dimensional in its texture, like, say, a cream of tomato soup. That means I take some care not to blitz the ingredients into a fine purée, but rather aim to keep it a little chunky with some obvious body.

As for temperature, go for chilled as opposed to icy cold. Why? I find gazpacho really loses its depth of flavor if allowed to get almost as cold as ice. An hour’s chilling in the refrigerator is just fine.

Just before serving, I like to sprinkle over a few good-looking pieces of diced cucumber, red onion, and bell pepper. It’s not essential, but it is brightly pleasing to the eye. 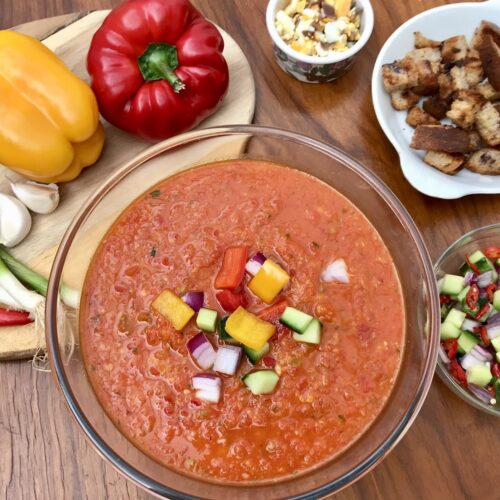 I then like to present the bowl at the table with a little of the garnish on top, and the tapas-like condiments served around it in small dishes. Offer folks a good-sized ladle so they can fill their soup bowls, and encourage them to add the savory sides as they please.