Hot, lightly spiced, and darkly rich, the tastes and textures of sopa seca de fideo con ancho – this unusual Mexican treasure – are as striking as its history. Focused firmly on ancho peppers, it blends Mexico’s age-old love of chilies with the ancient tradition of Spanish pasta.

I’ll get to its unusual history a little later. Right now, since the emphasis of this hearty lunch or supper dish is almost entirely on ancho peppers, it’s worth looking at the reasons why they take centre stage.

Anchos are very ripe, dried, red poblano peppers, and they’re one of the cornerstone-chilies in Mexican cuisine.

Frequently sold as ‘chile ancho’, these thickly fleshed, dark maroon beauties are giants in comparison to other dried peppers – the ones I used were about four inches long, a third of an inch thick, and close to three inches wide near their stem.

They’re also huge in terms of their multiple flavors. Anchos have a deep, smoky complexity that combines the lingering fruitiness of raisins with a smoldering touch of nicely bitter coffee, and the molasses-like glow of black licorice.

I’ve read that their heat can vary a lot, and that they’re often classed as being mild. Well, not always. Mine were pretty punchy. They had a very definite, slow, low burn that my chili-loving fellow diner felt was far from middling.

To pull out the best of their flavors, anchos do need to be given a shallow soaking for about 30 minutes in boiling water. They seem to swell with pride – and certainly in size – as a result of a hot-soak that revives the fulness of their rich savours. And that’s exactly what this dish is all about.

While not as famous as Italy for its pasta, Spanish cuisine has for many centuries featured fideos – noodles.

Often looking like vermicelli or angel hair pasta, fideos are made – just like all good pasta – from a dense dough of water and durum wheat which is rolled, cut and dried.

Spain’s fideos probably have Arab culinary roots. These date back about 1300 years to when early medieval Spain was ruled by the Moors – who were well-versed in cultivating and processing the essential wheat for pasta: durum.

Skip forward several centuries, and it was the fideo-eating Spanish who introduced their noodle making wheat to Mexico in the early 1500s. As to when someone first thought of mixing fideos with a seriously rich, ancho sauce, well, who knows?

What I do know is that the pairing works exceptionally well. That’s especially true given how fideos are typically cooked. Quite unlike Italian pasta, fideos are usually fast-fried to begin with, and then simmered until completely softened in their accompanying sauce.

And that’s how they’re cooked here, First, they get given a dark golden, surface-sealing hue for a few minutes in hot sunflower oil – to really highlight the fideos’ nutty, earthy flavors. That’s followed by about fifteen minutes’ gentle bubbling in the thick, ancho-dominated sauce.

The result is that the fideos keep all their very obvious body but are delightfully soft – without the slight bite that you’d perhaps associate with the Italian ‘al dente’ style of pasta. It’s certainly an unusual effect, but it’s also wonderfully satisfying.

Unusual name for an even more unusual dish

Dry soup? Well, not exactly. There is some liquid here, but just enough for making sufficient simmering sauce to finish cooking the noodles. This is more of a heavily sauced dish rather than a brothy noodle soup.

A few ground cloves and a teaspoon of ground cumin are the only spicy additions to the fideos’ sauce. Even though the quantities are small, these two spices have enough distinctive character to have a subtle impact among the far more assertive flavors of the ancho peppers.

Add some garlic, and a cautious amount of chicken stock, and that’s it – you’ve got a homage to the ancho pepper.

Back in 1867, a Frenchman called Jules Gouffé published Le Livre de Cuisine, ‘the book of cooking’. As head chef at one of the swankiest, trendiest, gentleman’s clubs on Earth – the Jockey Club in Paris – Jules was a real big-shot in 19th century cooking.

And he had a brother who also pretty nifty in the kitchen. Over in England, Alphonse Gouffé had already been Queen Victoria’s head pastry-chef for 28 years when Livre appeared. And it was Alphonse who translated the big book into English – and perhaps made sure that its title got a bit of an upgrade to The Royal Cookery Book.

What really interests us here is an 1893 Spanish edition – El Libro de Cocina – that was published in Mexico and included an appendix covering recipes for Mexican and Spanish cuisines. That’s apparently where our recipe originally comes from, and is based on the version featured in My Mexico: A Culinary Odyssey by the modern doyenne of Mexican cooking, Diana Kennedy. My Mexico: A Culinary Odyssey With Recipes
$11.99
Buy Now
We earn a commission if you click this link and make a purchase at no additional cost to you.

In the spirit of Ms. Kennedy’s incredibly knowledgeable advice, I served the sopa with wedges of avocado, slivers of strong parmesan, thick slices of limes, and simple sprigs of cilantro.

And I’m really pleased I did. Here’s why. The creamily mellow avocado is grand alongside the texture of the fideos and the sauce’s seriously big flavors. The parmesan is just born to be a topping for sauced pasta, and the limes add an arrestingly fresh, bright tang.

And then there’s the shiny, green pungency of cilantro. As one of the most valued herbs in Mexican cuisine, in this dish it adds its very own welcoming smile – bienvenido a Mexico! 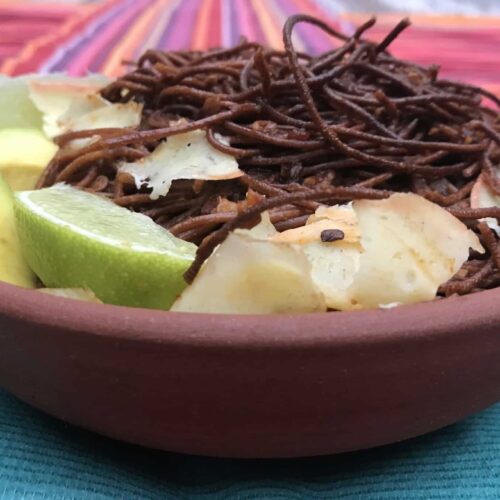 For the essential garnishings

After that 15 minutes’ simmering, you’ll probably find the pasta nests have lost their shape, that’s fine.  I set my range of garnishings onto a few pretty little serving dishes, so folks could help themselves at the table. For the sopa, I ladled it into big, warmed bowls, so there were even amounts of fideos and ancho sauce in each bowl. And just like all grand pasta dishes, I enjoyed mine with a soup spoon and a fork.