It’s amazing how a few, simple ingredients can produce something so outstanding. That’s Sopa Azteca – a delicious Mexican tortilla soup. Add some even simpler finishing touches to an easily made broth of pasilla chilies, tomato, onion, garlic, oregano, and chicken stock. You’ll have an incredibly satisfying meal-in-a-bowl.

In his traveller’s book of recipes, The Road to Mexico (affiliate link, folks), Rick Stein says he loves Mexican cuisine because it’s an “extraordinary combination of savory, spicy, fresh, and sour.”

The intensely rich, deeply savory spiciness of its broth is built on a foundation of pasilla peppers together with cherry tomatoes that have first been charred until they darken in a dry, heavy skillet set on scorchingly high heat. That heat adds a deeply rich smokiness to the tomatoes and intensifies their tangy, natural sweetness.

Lovely as those charred tomatoes may be, pasilla peppers are the real star here, adding an astonishing complexity to the strikingly powerful flavors of our broth.

Pasillas are the dried version of ripe chilaca peppers, and their name means ‘little raisin’ in Spanish. With a deep, ruby-red color that’s so dark it verges on black, these smoky, mild chilies have a particularly distinctive flavor that’s often likened to dried fruits and berries. And chocolate. Not the candy-bar sort, but rather the rich, bitter-sweet, dark variety with a very high cocoa content.

And then, underneath that complexity, pasillas have a lingering, wonderfully warming, mild heat. You’ll know it’s there, but the heat is a backdrop against which all its other flavors get to shine.

The same goes for the onions and garlic, which emphasize the savory spiciness of the tomatoes and pasillas. Softened together in a little lard over low heat, slices of red onion and garlic add an earthy sweetness to the broth, which is then nicely rounded by plenty of fairly salty chicken stock.

I say ‘ingredients’ because, in Sopa Azteca, they play a far more critical role than merely acting as attractive garnishes for the glorious broth.

They’re an integral part of this dish, with each one adding its flavor, color, and texture to create the overall effect that has made Sopa Azteca a classic example of Mexican cuisine’s simple sophistication.

Chunks of avocado and whole sprigs of cilantro add two very different types of freshness. The mild, nuttily creamy avocado introduces a starkly mellow contrast that sharpens the focus on the broth and highlights its delightful range of strong flavors.

The cilantro does something similar but in a far more freshly insistent way. Leave it whole – tender stalks and all – to maximize the aromatic immediacy of a unique taste with enough character to go toe-to-toe with the broth.

As you’d expect, the limes lead the charge by adding a cutting, sour tang. And that sudden sharpness is supported in a far subtler way by the soured cream and the cheese.

And then there are the crisp-fried tortilla strips

Last but not least on the list of essential ingredients that complete the finishing touches are strips of golden, crisply fried tortilla.

Some of these are served in the broth, and some are served alongside. The result? You get two sets of texture, and two sets of flavor from the same batch of tortilla strips.

The strips that become softened in the broth pick up a fair amount of its flavors, but they still keep the homely, slightly earthy taste – and similar texture – of ‘plain’, warm tortillas. That’s because hot-and-fast frying in enough oil creates a surface ‘barrier’ that helps to stop the strips from turning unpleasantly soggy.

As for the strips served crisply alongside, well, these have all the crunchy taste of what they really are – the moreish, savory tortilla ‘chips’ at the heart of a plate of nachos.

It’s way more than the sum of its parts

For sure, Sopa Azteca gets referred to as soup, but, just like, say, bouillabaisse from France, it’s easily good enough to be a wonderfully satisfying meal in itself. And that’s how I’d recommend serving it.

I’ve read that, strictly speaking, this version should be more properly called Sopa de Tortilla and that, to earn the Azteca title it should feature some pieces of shredded chicken among its finishing touches.

That may well be the case. However, it strikes me that calling this ‘tortilla soup’ doesn’t do it any justice at all, and I’m confident that, time and time again, you will happily agree. 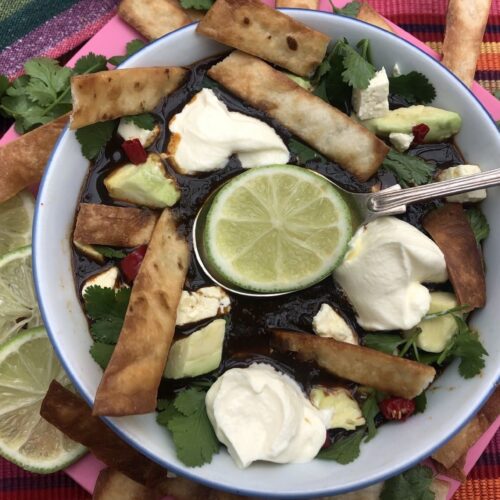 For the essential finishing touches