Agrodolce – literally bitter-sweet in Italian – is a big feature of Sicilian cuisine. And it works superbly in this beautifully balanced Sicilian braised rabbit recipe, where red serrano peppers add sparky heat to the herby, Mediterranean flavors of juicily tender rabbit.

The culinary concept of sweet ‘n sour is one I associate mostly with the cooking of China and Southeast Asia – and not immediately with the sunny cooking from the southernmost part of Italy.

So, how does this combo of opposites work in a dish that has its roots in Sicily? Well, the salty sourness comes from capers, green olives, and white wine vinegar. Those distinctive, sharply tanged flavors are countered by the sweetness of red and yellow bell peppers, carrots, celery, red onions, and a little sugar.

The two sets of contrasting flavors are then melded together by yet more bold, classically Mediterranean savors – garlic, oregano, thyme, bay leaves, and olive oil. And chilies. Typically, those would be the pretty hot and smokily fruity Calabrian peppers that hail from southern Italy.

Now, beyond European shores, these peppers are not widely available. If you can’t find them, fresh red serrano peppers would be a grand alternative – and that’s what I used. They work well here, giving a crisp focus to the bright, sunshiny flavors that are a hallmark of cooking in the agrodolce style.

Because its fat content is so low, it pays to cook rabbit gently and slowly – otherwise it easily tuns dry and a loses its inherent succulence and subtly rich flavors. In comparison, even a relatively delicate meat like young-ish, free-range chicken is more robust and can happily be cooked faster and at much higher temperatures.

That’s why rabbit is so well suited to being braised. In this case, that means starting with some slow, medium-heat frying in plenty of olive oil to give the meat an appealing, lightly golden color. That’s then followed by about 45 minutes of gentle simmering in a big pot with a covering, herby broth of bell peppers, onions, garlic, carrots, celery, and serranos.

Once the rabbit’s finished braising, you want to let the whole lot sit and cool in its big pot for a few hours – so the flavors can relax, mingle, and reveal the best of their individual character.

By the time I served mine, it had rested for about four hours and although the tastes had mellowed, they’d each become more confidently distinct.

The effect put me in mind of how lovely it is to sit under dappled shade on a hot summer’s day – enjoying the very best that sunshine has to offer.

First up, it’s hot. The heat in ours comes from a dozen fresh, red bird’s eye chilies. These are scorched in olive oil over high heat until they get a dark, blistering char. That accounts for the pilacca’s big whack of fiery smokiness. The scorched chilies then get finely chopped and mixed with generous amounts of garlic, red wine vinegar, salt, more olive oil, and some flavor-rounding sugar.

Add plenty of orange zest to give a tangy fruitiness, and you’ve got an exceptionally vibrant sauce to go along with your Sicilian-style rabbit. And with some very fine potatoes.

It may be one of the most versatile herbs, but rosemary’s complexity of fragrance and flavor puts it in a class of its own. It’s great at giving sultry, bass-note savors of pine, citrus, mint, and pepper to foods that are cooked with it.

And that’s particularly true of potatoes – especially when they’re roasted in a hot oven along with some olive oil, whole cloves of garlic, and chunky pieces of red onion.

When the potatoes are slightly crisped and golden, their wafting aromas and infused flavors embody so much of Mediterranean cooking’s immense appeal. So much so, in fact, that as the potatoes were roasting, a friend who shared this meal with me said she felt my urban kitchen had been fragrantly magicked into her vision of rural Sicily.

To satisfy four good appetites, I’d go for two rabbits to give you a total weight of about four, bone-in pounds of meat. This is where it really helps to have a good butcher who will do the prep if you explain the type of rabbit dish you’re planning.

Alternatively, you could go for a couple of ‘whole’, frozen rabbits, each weighing around two-and-a-half pounds. They’ll typically come skinned and gutted, and it’s really easy to handle the prep yourself once they’re defrosted. Now, I’d never done that before, but there’s a great instructional video from one of Jamie Oliver’s team that gave me all the straightforward guidance I needed. 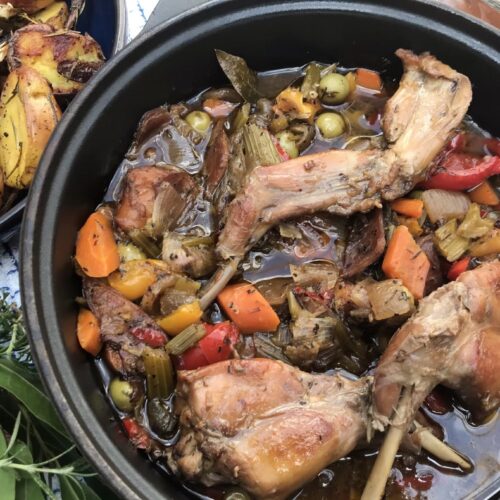 For the braised rabbit

For the rosemary roasted potatoes

For the Sicilian-style pilacca sauce

The pilacca sauce is really grand with the rabbit, but, for me, it’s truly exceptional when generously applied to those wonderful rosemary roasted potatoes.
What’s also great is that your pilacca will keep in a jar in the refrigerator for several days. I think you’ll find it really is very versatile – and might not last that long.