I’ve come to think of these dumplings in much the same way I consider soft-boiled eggs with hot, buttered toast – simply delicious. And, in the often daunting, complicated-looking world of Chinese dumpling-making, I’d rank these in the how-to-boil-an-egg class of difficulty.

So, if you’ve never made dumplings in the dim sum style before, these are a great, confidence-boosting way to make a really successful start.

When it comes to Chinese cooking, my little bits of knowledge come almost entirely from Ken Hom. Over 40 years ago, he began introducing Asian cuisine to an entire generation of home cooks who loved the food but knew pretty much zero about how to cook it.

Even today, one of his early books, ‘Ken Hom’s Chinese Cookery’ is still regarded by the great and the good of the culinary arts as one of the absolutely must-have cookbooks. Ken Hom's Chinese Cookery is chock-full of easy-to-prep recipes that stay true to the flavors that make Chinese cooking so delicious.

As for the cuisine of Sichuan, here’s what he says about it: “Sichuan’s robust recipes are famous in terms of taste, textures, colors, and aromas.”

You’ll find that those flavors each keep their own identity really well, and there are two reasons why they do that.

Second, the cooking time is really short, just a matter of minutes in a big pan of barely boiling water. That’s all it takes to cook the pork so that it retains all its juiciness, to slightly soften the spring onion, and to infuse the pork with the warmth of ginger, the smokiness of sesame oil, the slight astringency of Shaoxing wine, and the unique, slightly numbing, peppery-warm, salty-citrus hit of those Sichuan peppercorns.

Unique? With a numbing, warming, peppery hit of salty citrus? Yep. That’s the very unusual, hard-to-pin-down taste profile that makes these so-called peppercorns unique. Combine them with chili peppers and you get something which is known in Chinese as málà – numbing and spicy. And málà is very much a defining feature of Sichuan cuisine.

And then there’s the dumpling’s essential chili oil sauce

This is salty, spicy, aromatic, tingly, garlicky, sharp, and caramelly sweet. Those fine characteristics come from light and dark soy sauce, star anise, ginger, cinnamon, Sichuan peppercorns, rice vinegar, plenty of garlic, and some dark brown sugar. But, delectable as those lovely ingredients all are, they’re really only here in a supporting role.

The fiery star in this sauce is Chinese chili oil, super-charged with fresh, finely mashed Thai bird’s eye chilies. And that doesn’t even take those fresh serranos used as garnish into the equation. To put it mildly, this sauce is hot – capital ‘H’ hot.

Poured generously and piping hot over the cooked dumplings, the effect is shockingly delicious and astonishingly satisfying. The immediate, umami-packed scorch of the sauce is in startling, eye-widening contrast to the dumplings’ silky, mildly wheaten-flavored wrappers and the rich, porky savoriness of the filling.

To keep things ultra-simple, I used square, store-bought, wonton wrappers / skins. Now, to make these dumplings in a possibly more authentic Sichuan-style, you could use circular wonton wrappers to seal the fillings inside a plump crescent-shaped shell with delicately pleated edges.

But square wrappers make things easier and quicker. Put some filling in the wrapper’s centre, wet its edges with water, and fold the wrapper over the filling to form a triangle. Pinch the two open seams together to seal them shut and you’re done – in way under 60 seconds.

These are optional, but I do like how fine they look scattered over the sauced dumplings. Apart from that, I’m also won over by the sweetly mild, oniony crunch of the scallion leaves, and the crisply fresh, fairly gentle, fruity heat of those thinly sliced serranos.

It’s up to you, but I reckon these dumplings definitely deserve them.

Shop Our Spicery On Etsy
Up The Scale Set II: Jalapeño, Habanero, Ghost Powders
One of our most popular spice sets! Explore the Scoville scale from medium to super-hot: Ground jalapeño, habanero, and ghost pepper powders. 100% chilies, no additives. 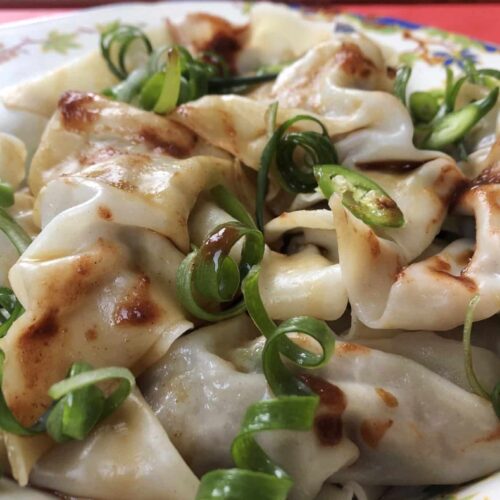 For the dumplings’ wrappers

For the dumplings’ filling

For the chili oil sauce

Before you begin Make sure to have a big platter or tray to hand so you can lay the formed dumplings on it in a single layer as you make them. You’ll also need a slightly damp cloth to cover the formed dumplings, so they don’t start drying out before you boil them. Tips for folding your dumplings When you’re folding and sealing your dumplings, it helps to keep a couple of things in mind. First, the wrappers come with a very light coating of flour that keeps them separate in the pack. That coating helps when you wet the wrapper’s edges just before you seal them – the little bit of water mixes with the flour to form sticky edges that makes for a good seal. Second, wonton wrappers are thin and pretty fragile, so take care to be firm but gentle as you press the edges together to seal the dumplings shut. If you tear a wrapper as you’re forming the dumplings – like I did with a couple – start again with a fresh wrapper.