Quesabirria tacos are right on the money for big gatherings. They’re hot, spicy, beefy, and cheesy. With a lip-licking, taco-dipping sauce alongside, they’re stellar for sharing with friends — best with loads of laughter. And napkins. Lots of napkins.

First there was birria

Adored for many centuries, birria is a fiery, meaty, slow-cooked, smoky stew from the Mexican state of Jalisco. Spiced with cinnamon, cumin, and cloves, its adobo-style sauce is tanged with apple cider vinegar, and enriched with onion, garlic, oregano, and charred cherry tomatoes.

Fiery? Oh, yeah. Birria’s complex burn comes from a mix of ancho chilies and chile de arbol. The ancho chilies are there to pull in a warming, smoky fruitiness. As for the arbols, well, the ones I’ve been cooking with recently are hot — easily as hot as bird’s eye chilies. Which means they’re adding a very evident, up-front fire.

So, what are quesabirria tacos?

Pack that hot and spicy birria into a tortilla, and crown it with cheese. That’s a quesabirria taco. Well, almost.

I say almost because you’ll be cleverly saving the birria’s cooking liquid to create the crucial ‘consommé’ — the sauce — that absolutely has to come alongside. And that sauce is vital for the really fun part — taco-dipping.

Now, stepping way back in time, the earliest versions of birria were certainly made with goat, and it was probably served in bowls, with a side of tortillas and extra sauce. Slightly less ‘genuine’ birria is often made with lamb — its flavors are a pretty close substitute for goat. Trouble is, there are lots of folks who aren’t super keen on those two sorts of meat. That’s probably why so much of today’s birria is made with beef. And that’s what we’ve chosen for our quesabirria tacos — bone-in, beef short rib, to be precise.

Short rib is perfect for this birria because it’s so suited to the slow, tenderizing cooking that releases all its intensely beefy richness. And by choosing bone-in short rib, you’ll be adding even greater depth to those glorious flavors.

You also want to look for short rib that’s nicely fatted. Around 15% fat is grand, but I’d happily go a little higher, rather than dropping any lower.

And there’s good reason for that sort of fat content. As the short rib slowly cooks in its adobo sauce, the fat is going to melt its glossy, high-beef flavors into the sauce. And the wonderful, slightly glutinous result is precisely what we’re looking for in these quesabirria tacos.

And your cheese choice?

To be strictly traditional, you’d have to go for the famous cheese of Jalisco — queso fresco. This is a very young or un-aged type of cheese — hence the fresco tag, meaning fresh. Pale-cream in color, mild, and fairly crumbly, it’s often compared with feta — especially the sort that has a low-salt taste, like so-called French or Danish feta.

So, bearing that convenient comparison in mind, I crumbled an easily acquired, mild feta onto the beefy birria — and was more than happy with the result. The feta’s cool, mellow tang is a great foil to the spicily hot, lavish richness of the birria. And because it’s not noted for melting, feta also adds a crumbly contrast to the oh-so-tender succulence of the beef and the slightly chewy softness of its tortilla envelope.

The simplest of sauces for your quesabirria tacos

It’s such a simple sauce because all you have to do is drain it from the birria’s cooking pot. Use a sieve to do this, and you’ll have generous amounts of the essential partner — the ‘consommé’ — for your quesabirria tacos.

It’s great as a dipping sauce for your tacos, and, if that’s the route you want to take, then you’ll certainly welcome having a few napkins to hand. Alternatively, you can just spoon the sauce into your hand-held taco and bravely go from there.

In the spirit of keeping things conveniently simple, I used 8-inch plain tortillas, each quickly warmed in a big skillet set on a high heat. Just like it says on the pack. Were mine authentic corn tortillas? Er, no. They were the far more readily available wheat variety. With the flavor-focus pulled in so tightly on the birria and that adobo sauce, I figured nobody was going to feel cheated by my non-purist choice of tortillas.

Besides all that, there’s a lot more filling in these tacos than there is tortilla — way more. I just about managed to get three pounds of pulled short rib into four tortillas. Which means that one quesabirria taco per person makes for a terrific lunch or supper.

The finishing touches. Limes and cilantro

The sharp, clean cutting bite of a little lime juice is always so welcome with food this hot and spicy. And here, that hit of citrusy freshness really highlights the diversity of flavors in your quesabirria.

As for the fresh cilantro, I like to leave it whole so that folks can roughly pull it apart and sprinkle the strongly aromatic ripped leaves and stems over their taco. Very Mexican, very quesabirria. 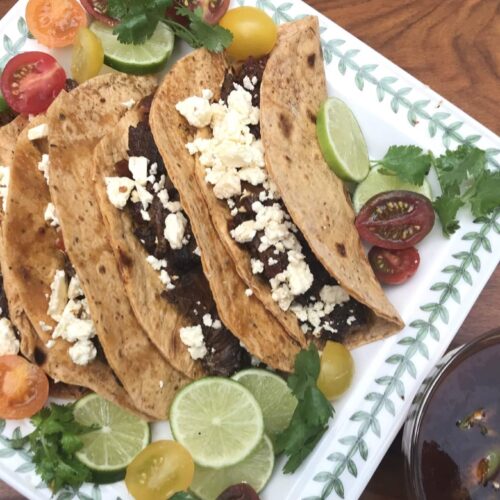 For the beef birria

For finishing the birria’s sauce

For serving — limes and cilantro

I presented my tacos at the table on a square plate, together with the quartered limes, the cilantro, and a few decorative, halved cherry tomatoes. And napkins. Plenty of napkins.