Pumpkin season means pumpkins are…well in everything. Soups, drinks, desserts, and yes…sauces. They are particularly good with Mexican sauces like mole. And it makes sense – mole sauce is already deliciously earthy and sweet, making pumpkin – a vegetable native to Mexico – a perfect addition to the mix. Try it with chicken, steak, and really and Mexican dish as a seasonal alternative to the normal mole.

We spice up this mole beyond the mild ancho pepper with a bit of crushed red pepper. If you prefer keeping it mild just remove the red pepper flakes. It’ll have a very mild hint of heat. 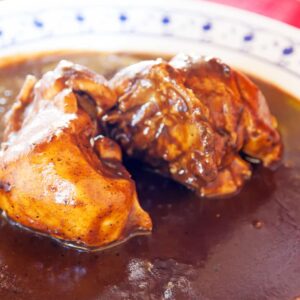 Want it milder? Remove the crushed red pepper from the recipe. The ancho peppers will be the only heat source (and a very mild one at that).

Shop fiery spices at our Spicery And get 15% off our spices.

Subscribe to our Wicked Wednesday newsletter and get our field guide ebook free and 15% off at our Spicery always!