Tonkatsu kare is part of a Japanese fusion food style (yoshoku) that goes back over a hundred and fifty years. It’s a pork cutlet curry that brings a bold, richly spiced flavor to the table. The spicy curry sauce is full of Anglo-Indian influence. And like European schnitzels, the cutlets are crunchy on the outside and juicily tender inside.

Adored in modern Japan, tonkatsu kare (literally meaning pork cutlet curry) is just one of many dishes from an immensely popular, highly distinctive style of cooking known as yoshoku — Western food. In many ways, it’s the complete opposite to Japan’s traditional, long-established, etiquette-rich cuisine, which is called washoku — meaning Japanese food.

Based on Western dishes that were modified to suit Japanese tastes, yoshoku’s roots are in the late 1860s. That was when Japan embarked on a drive to modernize itself. Links with the West were officially encouraged as part of this drive in a period known as the Meiji Restoration.

And the welcoming to Japan of once-shunned foreigners was certainly extended to food from the West. The result? The birth of yoshoku, an entirely new form of Japanese cuisine. But this wasn’t some groovy riff on Japan’s long-favored foods. It was far more fundamental than that. Its cornerstone was a previously forbidden ingredient — meat.

Early in 1872, Japan’s modernizing Emperor Meiji, effectively reversed a centuries’ old ban on eating meat. He proclaimed that he’d had a nice bit of beef — and suggested his subjects should do the same.

This was big news — really big. The top dogs of Japanese society followed the Emperor’s carnivorous lead, and meat eating became super-classy and ultra-fashionable. And because they didn’t really have any of their own, they looked hungrily to the West for meaty recipes — especially ones that would go well with rice.

Yoshuko goes mainstream — but, weirdly, only in Japan

By the late 1940s, yoshoku was losing its trendy, expensively elitist status, and gaining a much broader fan-base right across Japanese society. Today, it’s a mainstay of the country’s home cooking, and is everyday fare in many restaurants throughout Japan.

But yoshoku dishes like tonkatsu kare haven’t spread much beyond Japan — unlike, say, globe-trotting Japanese favorites such as sushi, teriyaki, and tempura.

Tonkatsu kare — The next big thing in flavor-packed comfort food?

The fact that it remains comparatively unknown is weird because our tonkatsu kare is like a big hug from someone you love. It’s comfort food right out of the top drawer.

Here’s why. The curry sauce has flavors that epitomize a sort of catch-all, Anglo-Indian curry. It’s generously spiced with cumin, cilantro, cinnamon, cloves, turmeric, ginger, and cardamom. Then there’s onion and garlic, plus a sweetening of apple. Cayenne peppers provide the essential fire (fresh green, not the ripe red), and the sauce gets its hearty weight from some potatoes and carrots.

And then there’s the schnitzel. The pork cutlet — the tonkatsu. A good, ½-inch thick, boneless, loin chop is encased in a golden-fried, crispy coating of protective panko breadcrumbs. The result? A classic combo of succulence with crunch. Hats off to tonkatsu.

Now, panko crumbs are a must here. They’re the Japanese take on breadcrumbs, and they definitely give this cutlet a crusting that’s way better than the often sadly soggy coatings on many Euro-style schnitzels I’ve suffered in the past.

Put the pair together — cutlet and curry — and the contrasts between the crisply delicate pork and hotly robust sauce are outstandingly good. Surprising? Perhaps. But, outstanding nevertheless. 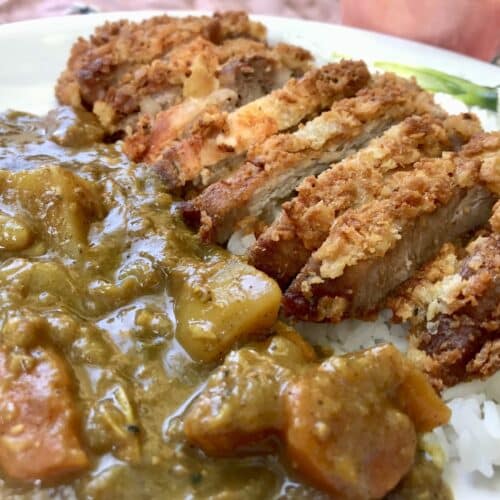 For the spicy curry sauce

Making the curry sauce (takes the longest, so we start here)

Preparing the cutlets — shaping them, a little pre-cooking, and coating them.

The bone-in, rind-on pork chops I used were about 9 ounces each, and ½ inch thick. I carefully cut away the bones and the rind / skin with a sharp knife, leaving me with the ‘eye’ meat, the fattier tag-end or tail, and a generous edging of fat of about a 1/3 inch thick all along one side. This is easy prep, but a good butcher will happily do this for you if you explain what you’re looking for.  On the rice timing: You want it to be ready when you’re ready to serve your tonkatsu kare. My suggestion? Set the rice to cook when you start preparing the cutlets. You can then turn the cooked rice into a bowl and keep it warm in a low oven.

Keyword Cayenne Pepper
Did you make this?Mention @PepperScale or tag #PepperScale so we can see what you made!
UPDATE NOTICE: This post was updated on July 29, 2021 to include new content. It was originally published on July 28, 2021.