Hot and deeply flavoured, this peri-peri chicken recipe could well become your favorite way to use chicken. The star in this dish is a sauce made with a chili that found its home in Africa around five centuries ago. You may know it as the African bird’s eye chili. But way, way before anyone gave it that comparatively bland tag, it was known in Africa as peri-peri – “pepper-pepper”. As they say about New York, this chili’s so good, they named it twice.

It forms the basis of an intense, richly flavored sauce that’s used to both baste the cooking chicken and then be served with it. Intense and richly flavored? Oh, yeah. It’s hot, for sure – just as you’d expect from a chili with a median Scoville ranking of 75k.

But there’s also the subtlety of slightly charred fruit. Think of hot-grilled peaches or maybe a baked apple. Like Africa itself, it’s complex. And difficult to understand unless you’ve experienced it first-hand.

In this recipe, the marinade for the chicken plays a major role. It adds to the depth of tastes. Lemon juice, mashed garlic and salt. Simple ingredients. But their simplicity combines to highlight the flavours of the chicken. The marinade is so important because it protects and maintains those flavours. And it ensures they don’t get overpowered by the peri-peri’s potent presence. There’s some paprika in the marinade, but it’s really there to give an appealing color.

Like so many of the best things in life, this recipe sticks to the notion of simpler being better. It’s quick to prepare and easy to cook. What more could you want?

Well, drinks, of course. A cold, light, crisp beer would top the list. Nothing too deeply hoppy. Maybe a Corona or a Sol. Perhaps a lager with a dash of lemonade. My African choice would be a couple of beers from Namibia, Windhoek Draught and Hansa.

But no matter where you are in the world, you could go for a drink from the country where Africa’s chili first arrived, Mozambique. Known as Katemba, it’s a straightforward, half and half mix of inexpensive dry red wine and icy-cold cola. You may well be pleasantly surprised by it.

Pinot Noir, oaked Chardonnay, Riesling and creamy, sparkling whites are all good. As, perhaps surprisingly, are fairly heavy reds. A big, lowish-priced Shiraz would my choice. Or, going lighter, a mellow Rosé.

Now, let’s look at some side dishes. First choice would be French fries – chicken and chips has always been a great combo. A boiled white rice is also good and gives a calming balance to the Peri-Peri’s spice.

But, I’d certainly also add to either of those side dishes a cooling salad of diced tomatoes, thinly sliced onions, lemon juice, olive oil, a little sugar, salt, and a few, small mixed salad leaves.

As they say in Mozambique – Bom Proveito. Enjoy the food. 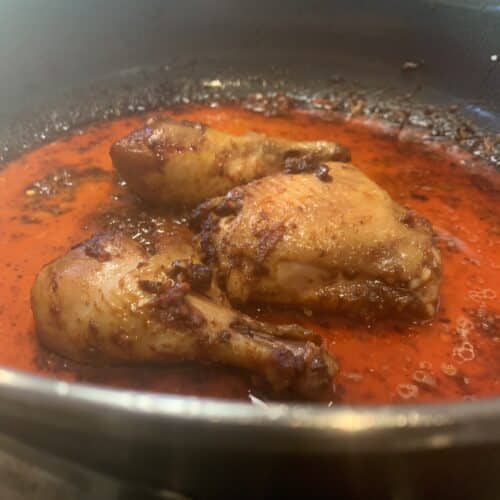 The citrus marinade and prep

For full flavor, you’ll need thigh and drumstick with bone-in, skin on. Each big enough to satisfyingly serve one person. Alternatively, buy eight smaller ones. Depends who you’re feeding… And if you can’t find whole legs, an equal mix of thighs and drums is fine.

Thanks For Sharing this Amazing Recipe. My Family Loved It. I will be sharing this Recipe with my Friends. Hope They will like it.