So much better when they’re not just the supporting act…

Chicken livers with peri peri peppers. Fab, right? But why not do them the justice they really deserve by highlighting them in a sensational main course.

What’s so great about these spicy chicken livers? First, chicken livers are exceptional value for money. Just like, say, good quality (and also pretty humble) tinned sardines. With both, you get masses of flavor for very little outlay. That’s gotta be a winner. But, just because they’re inexpensive – as is most offal – that doesn’t mean we should look down on them.

Perhaps that also happens because we’re squeamish about them. Is their name too bluntly anatomical? Maybe it hasn’t been toned down enough by the euphemisms we use for meat in general. You know, beef for cow, pork for pig, lamb for sheep. Same too with cuts of meat. Fillet, brisket, shank, sirloin, chuck, porterhouse. Is liver just a bit too ‘animal’ for our tastes – because we all know we have one? Maybe.

Second, they’re really good for you. Now, I’m no nutritionist, but if you’re interested in why they do deserve the tag, ‘superfood’, it’s all explained here on healthline.com.

And, of course, there’s that spice from the sauce that embraces it all. It’s superb and just adds to the entire meal. We need some serious kick here to partner those rich flavors. I’m using the peri peri peppers (a.k.a. African bird’s eye chilies) left over from making a peri-peri chicken last week. They’ll be grand.

What to know when buying chicken livers

Fresh chicken livers are ideal. But they also freeze well, so that’s also dandy. My preference would always be to go for livers from free-range chickens.

Fresh or frozen, what you do need is ones that have been properly prepared before being packaged. The most important thing is that they should have had all traces of the dark green gall bladder removed. That’s top-of-the-list important.

How to bring out the very best in the livers – with a little milk, black pepper, sage, and thyme

The livers go into a bowl for about 30 minutes with a little – and I mean a little – milk added to them. Just enough to give them a coating rather than a bath. Strangely, you’ll barely notice the taste of the milk, black pepper, sage, and thyme in the finished dish. What those few additions will have done is heighten the intensely deep flavor of the livers. They’re saviors of flavors.

And to drink? Top of my list would be a big red wine. Maybe a Cabernet Sauvignon or a Syrah/Shiraz. They all enhance the meal so well. 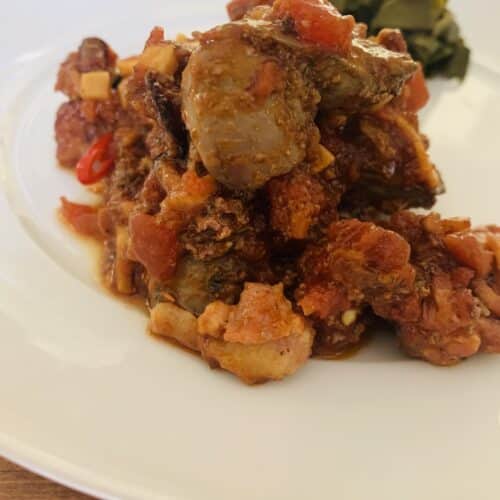 The chicken livers – and their herby soak of peppery milk

The spinach – your divine side dish

Putting it all together