Pepper Anatomy: What’s Inside Your Chili?

You are here: Home / Fun & Learning / Pepper Anatomy: What’s Inside Your Chili?

Botanically speaking, fruits are the seed-bearing pods on flowering plants. Chili peppers fall into this category; in fact, as nightshades they peppers themselves are technically berries in the eyes of a botanist. Other nightshade fruits include tomatoes and eggplants.

As with all other fruits, there are botanical terms for the different parts of a chili peppers anatomy. Each of these parts of the pepper has different properties which control the eating experience and heat. Let’s break down chili pepper anatomy and what each part brings to the table. 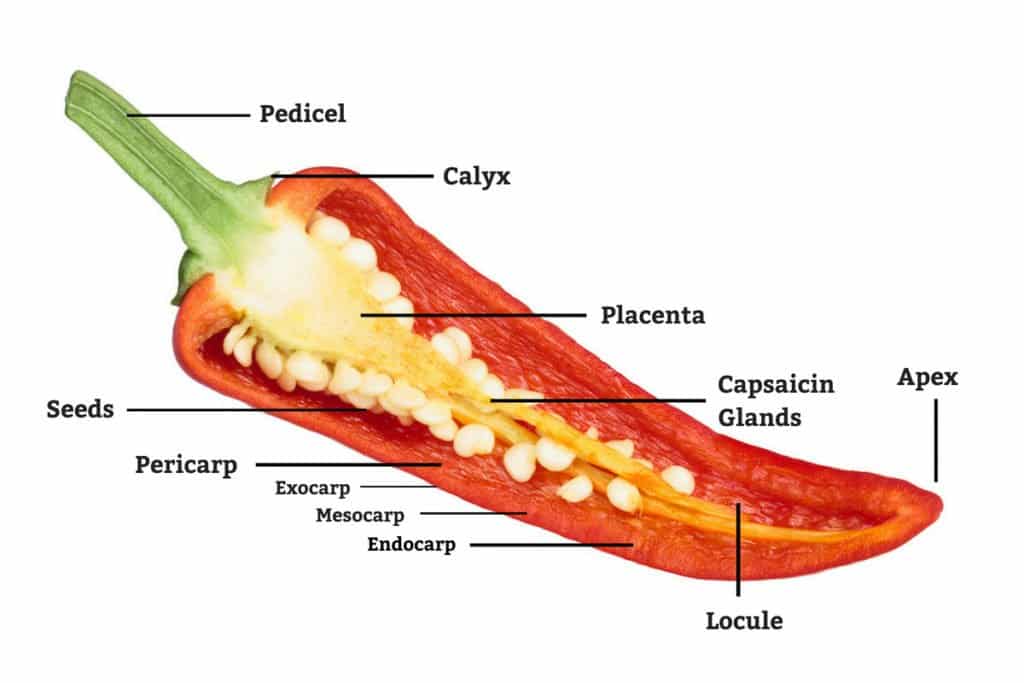 The pedicel is the stem that attaches to the flower or fruit to the plant. This is what you will cut to harvest the hot pepper. If there are multiple pedicels on a main stem, that main stem is called a peduncle.

The calyx is the part of the stem that connects to the very top of the chili pepper. It sits there like a hat. It is green and has outer parts called sepals that are made up of leaves and which would be like the brim of the hat. The purpose of the sepals is to protect the plant’s flower.

The seeds within the pepper fruit are the reproductive part of the plant. Contrary to widespread myth, they are not the main source of the heat in chili peppers as they are relatively low in capsaicin compared to the placenta.

This is where the seeds of the plant are attached to the top of the fruit. It is also known as the pith and lies directly below the calyx. This part of the plant is where most of the capsaicin in the chili pepper fruit resides (it contains 89% of the alkaloid capsaicin).

The capsaicin glands are positioned between the placenta and the seeds. If you want to lessen the heat of a hot pepper, this is the part that you will want to remove. Capsaicin is the compound that makes chili peppers hot. Because of this, many of the world’s hottest chilies have considerably more placenta when compared to other hot peppers.

The pericarp is the whole wall of the fruit. It refers to everything that encloses the fruit’s interior. The pericarp consists of three layers. The shiny, waxy outermost layer of the chili pepper is called the exocarp. The exocarp’s function is primarily protective. Underneath the exocarp is a middle wall called the mesocarp. As in other fruits, the pepper’s mesocarp provides structural support and holds much of the fruit’s water content. The innermost part of the pericarp is called the endocarp and it is the thin, membranous lining of the pericarp that encloses the placenta and the seeds.

The shoulder of the pepper is the rounded part of the pericarp just below the calyx. The shoulder can be broader or narrower depending on the hot pepper variety. For example, a scotch bonnet pepper will have broad shoulder, while a serrano will have a narrow shoulder.

The apex is the rounded tip of the fruit. Different varieties of hot peppers are rounded to different degrees. The apex of the chili pepper has the least amount of capsaicin in the whole fruit, so if you’re concerned with overall heat, use this portion of the hot pepper first.

Locules are the chambers within a fruit that contain the seeds. The number of chambers in chili peppers can vary. Some peppers have as many as four locules while others have only one. The locules in hot peppers are separated by placental walls.