Penne All’arrabbiata is quick and super-easy to make. It’s penne served in a fiery hot, rich sauce of tomato, onion, and garlic, cooked in olive oil and butter. Plus a little sugar and a bit of salt. Hard to believe that such simple ingredients combine to be so outstanding. That’s why I reckon it’s a must-have recipe in a chili fan’s repertoire.

Penne all’arrabbiata often gets enjoyed as a starter, particularly in those Italian restaurants that even stoop to serve it – this definitely isn’t posh pasta. That’s a shame. It’s so good that I make it as a single course meal.

It’s generally acknowledged as a Rome-style pasta. Italians were eating chilies in the late 16th Century, so the origins of this fiery dish could go back several hundred years.

Arrabbiata – not what you may think

For ages, I assumed this was a reference to Arabia and its hot, spicy foods – flavored with something like harissa from Tunisia or Morocco. Wrong.

I was in my early twenties when I first ate penne all’arrabbiata – not in Rome but in a London restaurant. Back then, in the early 80s, I didn’t associate Italian food with chilies. ‘Italian’ was bolognese and lasagne. So, it seemed like a fair assumption – pasta in the Arabian style.

No way. Turns out that ‘arrabbiata’ is an Italian word for angry. As in red-faced, sweating, and choking angry, rather than all steely-eyed and icy. The difference between the volcanic Sonny and the glacial Michael in The Godfather.

When you think about it, the true meaning is instructive. Why? Because it gives you a big clue to the necessary heat level in a proper arrabbiata.

Use red chilies proportional to your heat tolerance. Red jalapeños work well. Without question, the real deal should put a bit of angry color in your cheeks and maybe a little gasp in your throat.

Penne. The perfect pasta for a big sauce

As a pasta, penne is an excellent sauce-carrier. Its hollow tubes are much wider and thicker-walled than macaroni and it’s not smooth – it’s finely-ridged down its longer length. Result? It picks up sauce both outside and inside.

It’s chunky bulk also means it can go toe-to-toe with a strong sauce. Penne has the build to handle it. Unlike silky spaghetti, linguine, or tagliatelle, it’s a pasta with an uncomplicated mission. In Godfather-speak, it has the bluntness of Luca Brasi as opposed to the sleekness of Virgil Sollozzo. Kapeesh?

But not just any penne. Now, I’m no pasta connoisseur. The little I know means I always go for 100% ‘durum wheat’ pasta. A pale goldy, amber color, it’s made from hard wheat and water – and nothing else. If it doesn’t say ‘100% durum wheat’ – on the packet, don’t buy it. It’s not a rare or fancy type of pasta – I’ve never come across a supermarket that doesn’t stock it. It may be slightly pricier, but it’s worth the extra cents. 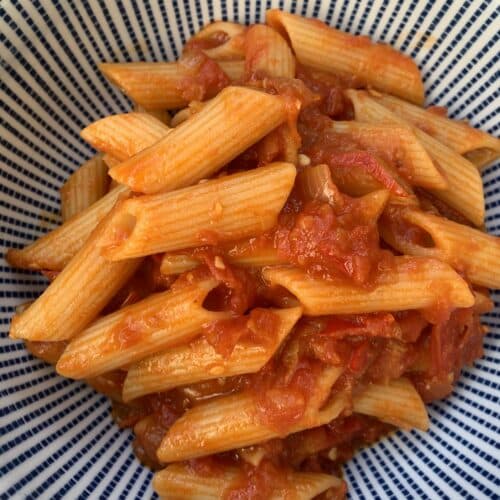 Bringing it all together

On the choice of peppers: That bright red is seriously important. You don’t only want to taste them in this dish, you want to see them. On heat – personal tolerances rule the roost here. Remember, this is supposed to be a powerfully hot dish – proceed accordingly. Red jalapeños work, but I used red serrano peppers here.  Parmesan cheese sprinkled heartily over the top? For me, always. No question. And a pairing –  olive ciabatta. Even though it might sound like a carb-overload, chunky, buttered slices of this crusty loaf go with it really well. Great for rounding-up the last of the sauce in your bowl. To drink, I’d choose a dry, sparkling white wine or a good, crisp Italian beer – maybe a Peroni or a Moretti.