Here’s a case of mistaken identity, times two. For two chili peppers that look truly nothing alike, there’s a lot of confusion that surrounds pasilla and poblano peppers. Supermarkets, in fact, often mislabel pasillas as poblanos (and vice versa), but how can that be the case when they look so different? Why is the long and wrinkly dried pasilla sometimes mislabeled as the wide and fleshy fresh poblano? And beyond the visual taken identity, are there any taste reasons why this could be? Do they share similar flavor and heat profiles? We examine this and more in our pasilla vs. poblano PepperScale Showdown.

These chilies look so different. Why are they sometimes mislabeled?

It’s true. When you look at the true chili pepper types by actual names, then there’s really no good reason why a pasilla should ever be mislabeled. The pasilla is a narrow dried chili that starts life as a fresh chilaca pepper. The poblano is a fresh chili that’s nearly as wide as a bell pepper. So where’s the confusion?

It typically lies in what the poblano becomes when dried. Ancho peppers. As anchos, poblanos share a similar enough look to pasilla chilies for the confusion to take hold. Both are dark and wrinkly, but there are tells. Pasilla tend to be longer and slimmer with a deeper shade of brownish-black. Anchos tend to be much wider and stouter, while featuring tints of dark red among the browns of the dried chili’s skin.

So there’s confusion times two here. First the produce vendor – who is likely unaware that poblanos when dried go by another name – thinks of anchos as simply “dried poblanos”. Then the true mistaken identity occurs when the pasilla and ancho are easily mistook for each other due to looks. The aftermath is a dried chili labeled “poblano” that’s nowhere near correct.

When you see fresh poblanos labelled as pasilla peppers, it’s again misidentification with likely a similar root cause. The produce vendor is assuming the poblano is the fresh version of pasilla, not knowing they come from the less-widely-known chilaca chilies. The thin and curvy chilaca and the wide meaty poblano look nothing alike, but the dried chili confusion produces the mistaken identity.

So which is hotter? Poblano or pasilla (or ancho for that matter?)

Let’s get to the good stuff. In terms of heat…well these are all very mild chilies. Anyone in your family can handle the very mild sizzle delivered by this group of peppers.

Poblano peppers range from 1,000 to 1,500 Scoville heat units, two to eight times milder than a jalapeño. Pasillas range from 1,000 to 2,500 SHU which gives them potential for near equal heat to the mildest possible jalapeño, but it, too, can be up to eight times milder. Ancho peppers, as dried poblanos, share the same Scoville heat range, but since they are dried when they reach full red maturity, anchos will tend towards the upper end of their heat scale. They tend to beat out their fresh poblano alternative for overall spiciness.

The taste: How do these chilies differ?

As a fresh pepper that’s typically eaten when green, the poblano has a very different flavor profile than either the pasilla or ancho. They have a rich, earthy flavor and, due to their thick walls similar to bell peppers, a very meaty texture. The ancho and pasilla are closer in flavor profiles since they are both dried. Pasilla – which means “little raisin” in Spanish – tastes unsurprisingly like raisins, earthy and sweet with a hint of smoky cocoa. Anchos tend to be slightly sweeter, but share a similar earthiness and smokiness, with a little touch of coffee bean to boot.

And their uses? When do you use a poblano? When a pasilla or ancho?

Poblanos are delicious as a bell pepper alternative. It can be used fresh in salads, salsa, and sandwiches. But it’s likely most well-known as a top-of-the-line chili for stuffed pepper recipes. Its thick walls keep their shape and don’t easily tear when stuffed. Pasilla and ancho often serve similar culinary purposes. In fact, both are part of the holy trinity of chili peppers which are used in traditional Mexican mole sauces. Both are also delicious, too, when rehydrated for soups, hot sauces, and hot pepper jellies.

So which is more common at grocers?

Poblanos and anchos are more common overall (both U.S. and globally), but pasillas are very common, too, especially in the West and Southwest of the United States. Both pasilla and ancho are widely available online. But review what you’re buying carefully. Oftentimes you’ll find packages labelled “ancho pasilla” which just adds to the confusion between these chilies. 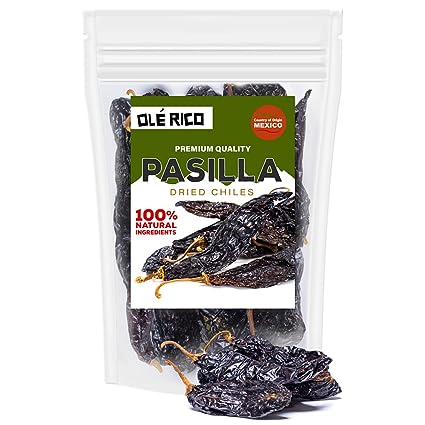 Can you use any of these chilies as substitutes for each other?

Let’s put the poblano to the side. As a fresh pepper, it’s simply not a substitute for the earthy and smoky flavor typical in dried chilies. Pasillas and anchos can definitely be substituted for one another, and that’s just another reason why the confusion can be so thick. The flavor profile of the dried chilies is close enough that – for many – it’d be tough to tell the difference once used in a recipe. Given that – this minor ancho/pasilla confusion for most is likely a non-issue.  But for those of us that revel in the unique flavors of the pepper scale, it’s a confusion that’s well worth defining.

Very informative. I want to make chili rellano; but not too spicy. I’m thinking poblano. Can eat too hot and spicy anymore.

Very interesting article. I was at the grocery store shopping for ingredients for Chile Verde, jalapeños, Serano chilies and what I thought were poblano chilies but when I got home and looked at the receipt that indicated I had purchased Pasilla chiles, yes I started the Chile investigation to see if I could Substitute the two chilies. This is really a great quiver of information, I don’t recall looking at any labels when bagging my chiles I just did a visual and away I went. So after reading this article it turns out I did get poblanos. The next time… Read more »

Very helpful.All the grocery stores here in Phx label poblanos as pasilla, even the Mexican food stores, and there’s a lot of them.

Another difficulty is when following a recipe that calls for “pasilla”. I’m left wondering if they are referring to a pasilla/ancho (as the bag is labeled) or chile negro (another name for the pasilla).

This was very helpful. I just left the grocery store after grabbing what were labeled as pasilla peppers, but looked a lot like poblanos. I was actually going to see if a substitution was possible when I came across this article.