If you’re an Old Bay addict, here’s a hot sauce you’ll want to know. McCormick announced last year in February 2020 that they would be releasing a limited edition Old Bay Hot Sauce, and it sold out quickly. But the good news is it’s back in 2021, and it appears to be here to stay. So, does this hot sauce do the famous Old Bay Chesapeake flavor justice? And how well-balanced is the heat behind it all? We cover all that and more. Let’s dig into a bottle. 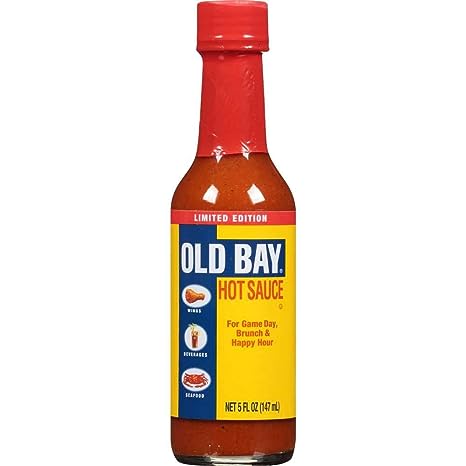 There’s a reason the original limited run of Old Bay Hot Sauce sold out in hours. It’s all that makes Old Bay Seasoning great, but with added fieriness and a Louisiana-style hot sauce tang. While the heat may be a little too timid for a perfect balance, it’s still incredibly tasty and very versatile in the kitchen. A must for Old Bay fans.

You’ll see immediately that Old Bay Seasoning isn’t listed here. And that’s to be expected — it’s simply listed as spices and celery seed, just like the ingredients list on a can of Old Bay. McCormick doesn’t give away the goods as to what’s specifically in Old Bay, but it’s one of those well-known secrets. You can see a breakdown here. It’s full of bold spices like mace, allspice, cloves, and cardamom. Just to name a few.

Old Bay Hot Sauce certainly has an upfront vinegar taste and you do feel and taste that pepper mash up at the top too. But it’s quickly met with that big, bold Old Bay Seasoning flavor. And it’s strong. If you love Old Bay, you’ll love the experience because it is a lot like Old Bay in liquid form with an added tang.

Though, the sauce does have a few flavor tricks beyond that. The mustard bran in particular adds a nice aromatic flavor to the back-end of the eating experience. And you do get a hint of garlic among the aftertaste.

In terms of sodium, Old Bay Hot Sauce is what you’d expect — heavy on the salt. There’s 160 mg of sodium per teaspoon serving, or 7% of your daily allowance. That’s salty. So if you’re watching your sodium intake, keep this number well in mind.

The primary heat source in Old Bay Seasoning is paprika, and that’s typically pretty mild. As such, Old Bay as a seasoning is more warm than it is spicy. But Old Bay Hot Sauce turns that all up a notch, using cayenne pepper mash similar to Louisiana-style hot sauces.

The result: There’s a kick, but it’s less than you may think. That pepper mash is well diluted with the vinegar, and the end heat lands somewhere in the upper-mild/low-medium range. As a reference point, it’s less hot in my experience than Tabasco Original Red Sauce (2,500 to 5,000 Scoville heat units). McCormick doesn’t list the Scoville heat units of Old Bay Hot Sauce, but I’d put it in the 1,000 to 2,000 SHU range. It’s a very eatable level of spiciness.

It may not taste too hot out the gate, but this is the type of sauce that builds in heat as you go. Though, it won’t grow past that low-medium heat range. And it won’t stop you going back for more.

The spiciness could be a little higher to better match that bold Old Bay flavor. But I get it. This is a product for the masses, where McCormick excels. The heat is really not a challenge here and it lets the Old Bay flavor keep center stage.

What’s to say? It’s Old Bay in liquid form, with kick and an added tang. Anywhere you’d use Old Bay that can handle a liquid additive and a vinegar kick, you’re good to pour away.

Seafood is, of course, where this shines. Old Bay is a Chesapeake Bay favorite for a reason. Fried calamari, crab, scallops, or any other really meaty crustaceans are delicious with it. It’s also perfect to use in soups and stews. In crab soup, this can’t be beat.

It’s also delicious as a chicken wing sauce. But make sure those are dry wings (no flavor or marinades) to start. Old Bay Hot Sauce mixed with other flavors = far too much stuff going on. I got dry chicken wings with my takeout recently, and then I dipped them into this hot sauce. They were some of the best wings I’ve ever had.

And don’t overlook Old Bay Hot Sauce as your new go-to for Bloody Mary’s. The seasoning has always been exceptionally good as a Bloody Mary additive, so the hot sauce fits right in.

Old Bay Seasoning has a fiercely loyal following, so if you’re part of the tribe this is a must get. Really, you may end up using Old Bay Hot Sauce as your daily driver instead of Tabasco or Sriracha.

Of course, it’s not as scarce as it once was (having originally been a limited run.) But Old Bay Hot Sauce is still not well known in all circles. The seasoning, though, is and that 100% makes this a terrific talking piece for a hot sauce collection. People will want to try it just to see how it compares.

Old Bay was founded in 1939 and its label hasn’t really changed since. It still runs with the classic yellow pop of color displaying pictures of the food you should use this with (which I adore.) It’s worked since day one and still works now — still with that vintage feel that speaks to consistent quality over long periods of time. You see the label and you just know what’s inside will be good stuff indeed.

There’s a reason the original limited run of Old Bay Hot Sauce sold out in hours. It’s all that makes Old Bay Seasoning great, but with added fieriness and a Louisiana-style hot sauce tang. While the heat may be a little too timid for a perfect balance, it’s still incredibly tasty and very versatile in the kitchen. A must for Old Bay fans.