Spiced with chilies, cinnamon, cloves, and cumin, our Mexican birria has depths of flavor that are as rich as its long history. This is a time-tested double act starring exquisitely tender lamb, and a piping-hot, super savory broth.

First things first. This is not a quick dish. The bone-in leg of lamb needs to marinade overnight, and then it’s going to get several hours’ slow cooking. Time is a key ingredient here, and it’s definitely worth waiting for the wonderful rewards it produces.

It all starts with a fiery adobo

In Mexican cuisine, adobo is typically a chili-centric, cook-in, marinade for meat. The one we’re using features ancho chilies and chile de arbol. Fruitily smoky and fairly mild, these two hot peppers are among the mainstays of spicy Mexican cooking. For our lamb birria, they’re mixed into a warmly aromatic, marinading paste with garlic, cumin, cloves, cinnamon, black peppercorns, a little vinegar, and salt.

Now, given that lamb has a deeper, more gamey taste than either beef or pork, it’s ideally suited to being paired with pretty potent chilies. That’s especially true of cuts like shoulder and leg. Because lamb can hold its flavors further up the Scoville scale, I added bird’s eye chilies to the mix. The result? This is an adobo with the spark of high heat that lamb always handles outstandingly well.

And here’s why the adobo matters. It’s generously rubbed over and into the lamb many hours before it begins to cook slow-and-low in a big, tightly sealed — and I mean tightly sealed — Dutch oven. By making a few, bone-deep cuts in the lamb, you’ll ensure the adobo can really spread its flavors through the meat. And that will certainly happen by letting it sit overnight in your refrigerator.

Carefully capturing the essence of the lamb

There’s an important reason for taking care to get a good seal between your big pot and its lid — you don’t want anything escaping from the adobo-pasted lamb as it bakes for 4 hours in a 350F oven. You’ll be keeping the flavors right there in the pot — together with all the meaty, spicy juices that’ll later be used as the rich foundation for your birria’s sauce.

This sort of sealed-in cooking means the lamb isn’t exposed to any direct heat, not even from the pot’s base. That’s because it’s seated on some halved onions that keep it raised above the bottom of the pot. And while the lamb doesn’t get direct heat, the sauce’s cherry tomatoes certainly do — lots of it.

Birria sauce — the other half of this classic double act

Sometimes referred to as the birria’s consommé, the sauce combines the lamb’s spicy cooking juices with pan-charred cherry tomatoes. Seared over high heat in a heavy skillet with a little olive oil, the tomatoes soften, and their sugars sweeten as you give their skins plenty of blackening burn.

That fierce charring adds more smoky depth to the flavors of the ancho chilies and the arbols. It also reduces the tomatoes’ acidity to a point where they have just enough sharpness to balance the lamb’s flavor-packed fattiness.

Remember those onions that served as a heat-protecting platform for the lamb? Well, they also play a part in the sauce, adding their own layer of sweetly caramelized, slightly tart savor.

And then there’s the oregano. With its punchy, scented taste, this lightly astringent herb has enough strength of character to distinguish itself in the sauce’s intensely rich flavors.

A bit of birria backstory

This has a poignant edge to it. Truly authentic birria is made with goat. These animals were introduced to South America about 500 years ago by the conquering Spanish — along with their domesticated pigs, cows, and sheep. As far as the Spanish were concerned, these were the ‘right stuff’ for European meat-eaters — and anything indigenous wasn’t.

But it seems the colonizers became really snooty about eating goat meat. Their disdain for anything made with it prompted them to give such dishes a rather ugly moniker– birria — meaning trash, valueless, without merit. In other words, goat was only suitable for being eaten by the subjugated locals.

Thankfully, attitudes and tastes have changed over the space of several centuries. Today, birria is lauded as a signature dish of Mexico’s Jalisco province, and there are loads of birria recipes for beef, pork, lamb, and, yep, goat.

Our recipe uses lamb for its bold, rich flavors — and because it’s a lot easier to find than goat. Also, telling certain people that you’re serving lamb birria will likely raise far fewer eyebrows than asking if they’d care for some goat. 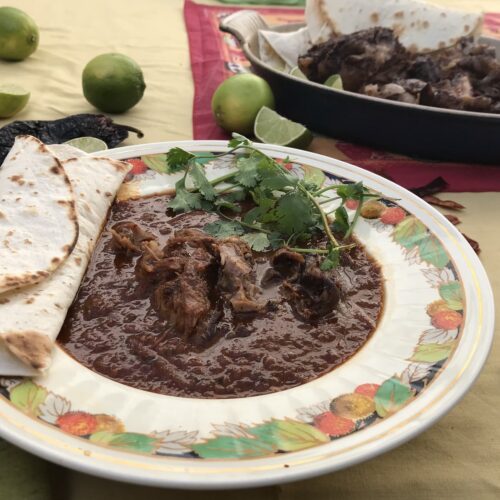 For the lamb’s adobo

For serving — limes and cilantro

Preparing your birria for serving

To serve — in handsome soup bowls.