You may not immediately think of hot sauce when you think of bourbon, but Kentuxican Bourbon Hot Sauce may change all that. It’s unlike any other hot sauce that I’ve tried: bourbon-y sweet, smoky, and tangy. So it’s flavorful and unique, but how does its heat balance stack up? And how usable is it? Is it more than a niche use sauce? We take Kentuxican Bourbon Hot Sauce for a ride to see what it’s all about. 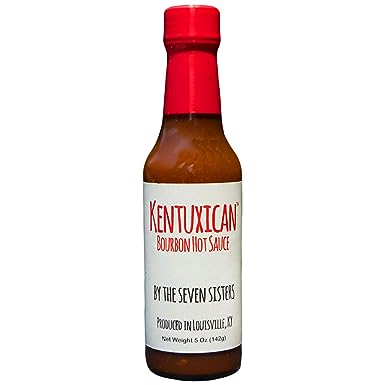 Kentuxican Bourbon Hot Sauce is a unique blending of Mexican and Bluegrass flavors. It’s earthy sweet, tangy, smoky, and fiery in all the right ways, well-balanced and delicious. If you love bourbon BBQ sauces or chipotle hot sauces, this sauce is a must to try.

Sweetness isn’t the first thing you experience in Kentuxican Bourbon Hot Sauce. You get that apple cider vinegar tanginess right at the top. And there’s definitely a little pungency from the onions and garlic right underneath. But quickly, this sauce turns to a sweet, earthy, and smoky spiciness.

That sweetness comes not only from bourbon, but also from the brown sugar, those carrots, and the morita chilies (more on that below). The habanero and Carolina Reaper may offer some assist on the sweetness, too, but the predominant experience comes from those three ingredients. It’s not an overly sugary sweetness, think more an earthy-sweet flavor.

Layered in that sweetness is the smokiness you get from those dried chilies, especially the morita. And the pepper medley (plus the allspice) adds some warmth throughout. That warmth even outlasts the chili pepper bite.

Some might say Kentuxican Bourbon Hot Sauce has the taste and feel of barbecue sauce, and I wouldn’t argue with that. A lot of the ingredients map to it. It’s just thinner, a little more fiery, and smokier (like a chipotle hot sauce) than what you’d typically get from a typical sweet bourbon barbecue sauce. So if you love some BBQ, you’ll feel right at home here.

On the sodium: Kentuxican Bourbon Hot Sauce sits at 55 mg per teaspoon serving, or roughly 2% of your daily allowance. That’s not bad for a hot sauce. It’s not low-sodium, buit’s certainly not as high as some hot sauces. But, of course, that’s not surprising since the sweetness is the real star here.

There are four chilies in that ingredients list, and two with major heat: habaneros (100,000 to 350,000 Scoville heat units) and Carolina Reapers (1,400,000 to 2,200,000 SHU). But that doesn’t translate into Kentuxican Bourbon Hot Sauce being super-hot. They are way down the ingredients list and not true players in the heat profile, beyond adding a small bump.

No, the spiciness is more of a nod to the dried morita chilies that star here (2,500 to 8,000 SHU). Morita chilies are simply dried and smoked red jalapeños. You’ll sometimes see them listed as morita chipotle (or chipotle morita). Compared to brown chipotle pepper (chipotle meca), they are smoked for a shorter period. So the smokiness is less, but the natural sweetness of the ripe red fresh chili stays more intact.

The Seven Sisters (the makers of Kentuxican) don’t list the Scoville heat units of the sauce, but I’d put it as lower medium heat. If I had to guess, I’d put it somewhere in the 1,000 to 2,000 SHU range. If you’re used to spicier hot sauces, you may even think it mild. There’s a kick, but it’s not too strong and it doesn’t linger. It bows out of the flavor profile quickly, allowing the black pepper warmth to be the trailing heat experience.

The kick feels right to me, but I could 100% see some feeling it’s not enough to balance the sweetness. For me, it was just enough to keep me coming back for more.

Really anywhere you’d use a chipotle hot sauce, Kentuxican Bourbon Hot Sauce can handily sub in. I tried it on eggs, pizza, and wings — all delicious.

And because of its BBQ sauce roots, Kentuxican makes a great (albeit thinner) BBQ-style dipping sauce. If you’re looking for a little more oomph for those chicken fingers or nuggets, look no further.

And of course, let’s not overlook burgers and fries. That bourbon-sweet and smoky flavor would turn a burger into something a ton more memorable.

That smokiness, of course, does limit things for those that don’t like that flavor. But if you fit into that camp, I’d still challenge you to give this hot sauce a taste. It’s not an overwhelming smokiness and the overall flavors are so well-balanced — I think it’ll have you coming back for more.

I really like the story behind the making of Kentuxican Bourbon Hot Sauce. The Seven Sisters say they created this sauce to blend the unique traditional flavors of Mexican hot sauce with the contemporary flavors of Bourbon to represent their home in the Bluegrass. “Kentuxican” says it all. That’s a fun and innovative flavor journey and a fun branding twist.

The label is simple and straightforward, focused on that “Kentuxican” moniker. It makes sense to focus on the brand name as it’s so unique, but the label just doesn’t jump off the shelf for me. It’s easy for Kentuxican Bourbon Hot Sauce to get lost in the background among competitors. And that’d be a total shame.

Kentuxican Bourbon Hot Sauce is a unique blending of Mexican and Bluegrass flavors. It’s earthy sweet, smoky, and fiery in all the right ways, well-balanced and delicious. If you love bourbon BBQ sauces or chipotle hot sauces, this sauce is a must to try.