Here’s a pie where all the fiery, spicy glory of jerk chicken is captured beneath a rough-puff pastry crust. It’s a taste of summer all wrapped up for winter with a sauce made from coconut cream, sweet potato, leeks, onions, celery, and carrots.

In its Jamaican homeland, making jerk chicken brings together a Caribbean mix of marinating seasonings with a particular way of cooking. It’s a culinary marriage that goes back a few hundred years and is still going strong today.

So, what’s the secret behind the long-lived popularity of jerk chicken? Well, as with so many great dishes that have stood the taste of time, it’s all surprisingly simple.

To be truly Jamaican, it works like this. Once the pieces of skin-on, bone-in chicken are liberally coated with their intensely spiced and potently fiery marinade, they’re slowly char-grilled over a glowing open fire made from aromatic pimento wood. Turned a few times and basted with the marinade as they cook, the pieces darken to a smoky crispness on the outside which locks in the meat’s tender succulence.

This slow, over-the-embers grilling is only one-half of jerk chicken’s secret. The other half is the blend of ingredients known as jerk seasoning or Caribbean spice. And there are two absolutely essential elements in that mix.

First, there are the must-have, fiercely hot, fresh chili peppers. In jerk seasoning, these are typically scotch bonnet chilies that line up right alongside habanero peppers in the heat rankings. Both these extra-hot peppers sit at the top of what’s generally considered to be the upper limit of enjoyable pepper heat. Go beyond that boundary, and you’re into a demonic realm where the heat’s so intense that it obliterates everything else.

The second essential is a round, dried, reddish-brown berry that’s about twice the size of a peppercorn. This is allspice, with a taste that’s often described as being a warming, aromatic mix of cloves, cinnamon, juniper, nutmeg, and black pepper. Yep, all those spicy savors are packed into one berry.

Back in the early 1600s, this striking variety of such oh-so-exotic flavors prompted the presumably astonished English to call it allspice. It goes under other names, and you’ll often see the berries referred to as pimenton, pimiento, or Jamaican pepper, but it seems to me that calling it allspice sums it up rather neatly.

Although you can buy allspice already ground, it really is far better to seek out the whole berries and grind them yourself so that you get the full impact of their vibrant, varied spiciness.

Now, high-heat peppers and multi-flavored allspice might get top billing in jerk seasoning, but they’re supported by garlic, onion, ginger, thyme, dark brown sugar, lime juice, and soy sauce. These add an earthy, sweet, sour, and salty edge to the fire-and-spice of the seasoning’s headline stars.

Rather than being cooked over the coals, our jerk-marinated chicken pieces get a fairly hot, oven roasting with a little olive oil before they’re prepped for the pie’s filling.

As the roasting pieces release some of their fat, it mingles with the jerk seasoning and olive oil, giving you a high-flavor basting sauce that’s just perfect for crisping and darkening the chicken’s skin.

Infused with all the spicy heat of the jerk seasoning, that char-roasted skin is going to be finely chopped once you’ve stripped it off the chicken and pulled the tender meat from the bones. And then all the fabulously flavored skin is heading to your pie’s filling.

This gets its lovely velvety texture from a simple sauce of softened onion, leeks, and celery mixed with coconut cream. Chunky pieces of carrot and sweet potato add body to that lovely pale green mix, along with their own cheerfully bright splash of color.

As for the meat from the chicken pieces, that stays in tender, bite-sized pieces that add to the pie’s overall appeal of being substantially wholesome. And that satisfying, homely appeal is crowned by a generous, golden crust of buttery, rough puff pastry.

Some call it rough puff pastry, and some call it flaky pastry. It’s certainly rich and buttery but is denser and more robust than a meltingly light and airy puff pastry.

Made with flour, butter, salt, water, and a dash of vinegar, the crust does puff up a little as it cooks, forming slightly flaky layers that are similar to what you’d expect in a true puff pastry but not so obviously pronounced.

And once it’s baked, the soft crunch of its nicely firm structure and its delicately savory flavors make this crust a marvelous companion for a filling that’s bursting with sensational contrasts of tastes and textures.

Free-range, bone-in, and skin-on whole legs are the way to go for this pie.

The bone and skin both add a lot of natural flavor to the chicken’s meat. But the skin is important for other reasons. It’s filled with all the glorious, marinating flavors of the jerk seasoning. And when the fat from the skin mixes with that seasoning it produces a wonderful sauce for basting the chicken as it roasts. 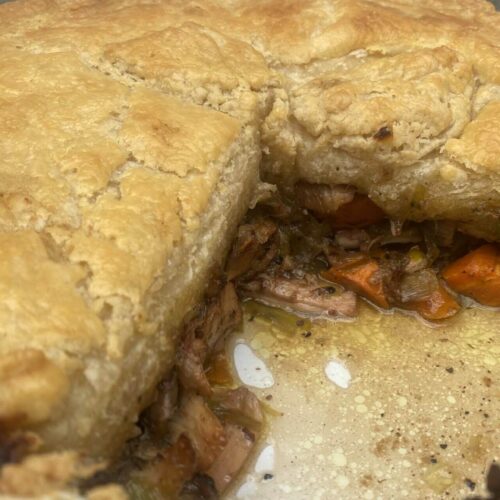 For the rough puff / flaky pastry

For sealing and glazing the pie crust just before baking

For the jerk chicken pie’s filling

Making the jerk seasoning, and marinating the chicken

Roasting the chicken legs, and prepping them for the filling

Bringing it all together, and baking your pie