This big—hitter from Jamaica is powered by jerk seasoning — a vibrant blend of high—heat chilies, allspice, cinnamon, ginger, nutmeg, garlic, onions, and limes. Sweetened by caramell-y brown sugar, and darkened with salty soy, it pairs perfectly with delicately tender chicken. Jamaican jerk chicken is one of those meals you won’t soon forget.

The flavor of Jamaican jerk chicken begins and ends with the seasoning. Our jerk seasoning certainly has the hot spark of potently fiery chilies, but its brightest star is definitely allspice. Quite rightly tagged as Caribbean cooking’s signature flavor, this little reddish-brown berry packs a surprising flavor punch.

We’re talking a seriously mellow mix of cloves, cinnamon, and nutmeg. Then add the clean, almost astringent bite of black pepper. Now think fresh — vibrantly fresh — and you’re almost there in sensing this berry’s unique delights. And I mean unique — nothing else tastes the same as allspice.

Put all those elements together in one package, and you’ve got a big clue to why it’s called allspice. It’s also known as Jamaica pepper — the island is by far the world’s biggest producer — and it sometimes gets called pimenta and pimenton, from the Spanish word, pimienta, meaning peppercorn or pepper.

Very spicy. Very hot. That’s what jerk seasoning is all about.

Allspice might take centre stage here, but the chilies are hardly cowering in the wings. Oh, no. Scotch bonnets are the traditional, real-deal chilies in Jamaican jerk chicken (or any type of jerk dishes), but similarly fiery habaneros do make a fine substitute. Here’s why. These are both seriously hot chilies, and, first and foremost, high heat is what you want from them in this seasoning.

Differences in fruity sweetness — bonnets are fruitier — don’t matter so much when the chilies are performing alongside jerk’s other strongly flavored players.

Now, if scotch bonnets and habaneros are pushing things too far for your taste, you scale things back a bit and go a little less spicy by using, say, Thai bird’s eye chilies. They’re hardly mild, but it’s important to remember that jerk seasoning just isn’t supposed to be mildly flavored. That part — the gently subtle flavors — is taken by the delicately tender chicken. And it’s the really marked contrast between the chicken and the jerk that makes this such a hugely appealing dish.

With a seasoning this special, you need to be choosy about your chicken. Free-range, all-natural has to be your baseline. To build great taste from that solid foundation, bone-in, skin-on thighs are the way to go.

The bones are a really grand heat conductor, which means they help with nicely even cooking — and they definitely boost the flavor of the thighs. Skin-on matters because you’ll be retaining all the wonderfully savory fat, and, at the same time, you’ll have the ideal surface for the blackening char that’s essential for Jamaican jerk chicken.

This charring isn’t about giving the thighs a nice golden tan. It’s about fast, scorching heat that heightens the jerks intense flavors. But, that sort of deeply darkening heat only comes into play right at the end of a cooking process that begins far less fiercely. The result? Well, you’ll have a thinnish, jerk-infused crusting over the thighs’ juicily tender meat.

And that tenderness comes from starting the chicken with some fairly low-and-slow frying in a stove-top skillet. The thighs get enough of that moderate heat to just cook them right through — so they’re ready for a fast, charring session under a very hot broiler / grill.

Side dishes? There are lots of contenders for Jamaican jerk chicken.

Rice would be a dandy choice — especially if it features some coconut. French fries are always a treat with the sort of spicily hot treatment you’re giving the chicken.

A couple of other suggestions would be lightly fried disks of red-skinned sweet potato, and a salsa-like, roasted mix of red bell peppers, yellow bell peppers, and cherry tomatoes. That’s the pair I happily opted for, and was very pleased with how their sweetness offset the big, bold flavors of the jerk chicken.

What I’d definitely serve with the jerk chicken is some quarters of fresh lime — to be squeezed liberally over the thighs. Lovely! 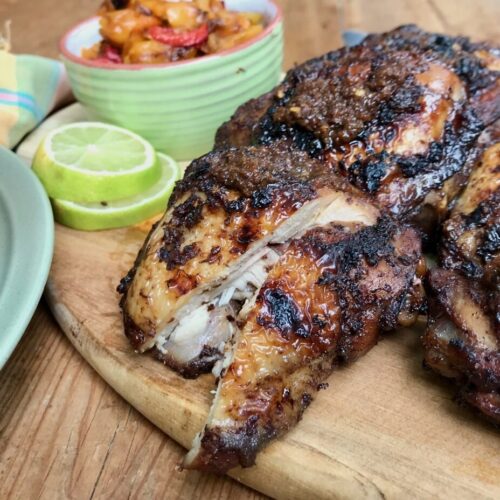 For the jerk seasoning