It might have its roots in Hunan, but hong shao rou — red-braised pork belly – is one of the most popular plays on pork throughout China. And it’s easy to see why. This is big, robust, seriously satisfying food. The richly-fatted pork is cooked in an intensely savory, browned-sugar sauce that’s infused with ginger and cinnamon, and underpinned by the subtle, classically Asian taste of star anise.

And being from chili-loving Hunan, it’s a dish with plenty of fire. The heat in our recipe comes from dried bird’s eye chilis (or Thai chilies) — there’s a dozen, ground red ones in the sauce. Now, with their seeds and all, those are pretty potent chilies. But rather than having an immediate, obvious dominance, they only begin to really strut their hot stuff in the sauce’s after-burn. You’ll definitely know they’re there, but they don’t push themselves right to the front of the line.

It takes time to be this good

Making hong shao rou is a grand way to spend a few leisurely, uncomplicated hours in the kitchen. Preparing the surprisingly few ingredients is pleasantly straightforward, and they all get cooked in one big pot. A little of the initial cooking is reasonably hot and fast, the rest is all slow and mostly low.

The hot and fast part is for getting a little lightly golden color onto the chunkily cut pieces of pork and, most importantly, melting-out a little of their flavor-packed fat. That’s important because some quick, hot stir-frying in the pork’s fat encourages the cinnamon, ginger, and star anise to begin releasing their flavors. Then the sugar goes into the hot pot, and gets stirred around until it turns darkly golden and starts to caramelize.

And now for the low and mostly slow part. That spicy, caramelized sugar is the base for a sauce in which the pork belly will slowly simmer for about two hours. By then the meat will be superbly tender and the fat-layered skin will have become meltingly gelatinous. And that slow simmer will have worked wonders on the sauce, reducing it down to a glossy, slightly syrupy consistency.

In her Chinese cookery book, Land of Fish and Rice (affiliate link folks), Fuschia Dunlop gives a recipe for a regional version of red-braised pork that’s much-loved in Shanghai.

What really struck me about this variant was the inclusion of hard-boiled eggs. They’re peeled, lightly scored with slits from top-to-bottom, then added whole to the sauce. Those slits open slightly in the sauce’s heat, and the whites pick up a little of its deeply red color.

Now, not only do they look great, but the highly contrasting flavor and texture of the eggs really is a grand combination with the overall, intense richness of the pork and its sauce. My recommendation? Go for it with the eggs.

To make the very most of the pork’s wonderful sauce, I like long-grained, white rice that’s boiled till it’s just slightly sticky. When cooked like that, I know the rice will help me mop up every last drop of sauce on my plate. Right now, I’m particularly fond of jasmine rice, so that’s what I used.

And for another, completely different contrast in terms of color, flavor and texture, bok choy is a grand choice. Ours is very quickly softened in boiling water, and then just as quickly stir-fried with thinly sliced garlic and a little sesame oil. 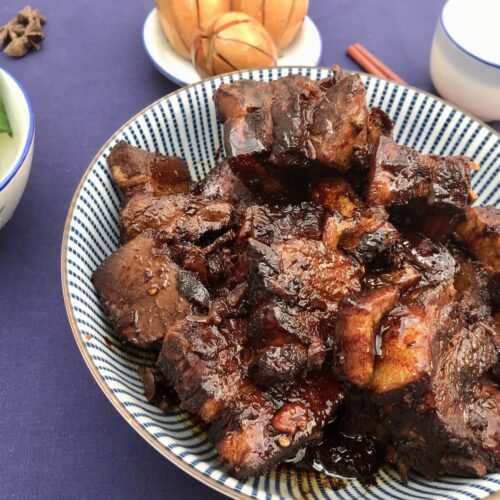 For the red-braised pork belly

For the optional eggs

For the garlicky bok choy

For the jasmine rice