With signature flavors from northwest Africa, a simple roast chicken is transformed into a Moorish delight that’s perfect for special occasions. This harissa roasted chicken is so outstanding that it may well be the finest way you’ve served a whole chicken.

I’m a huge fan of a typically English, Sunday lunch chicken. That’d be golden roasted with a sage-and-onion stuffing. Glorious.

But I have to admit, this Moroccan-style chicken outdoes it. This one is so astonishingly good that the relatives who enjoyed it with me, reckoned it was easily special enough to star as the keynote dish for a big celebration like Christmas Day.

Our surprisingly simple recipe brings together a range of exotic tastes, textures, and aromas that pair so well with the flavor of the exceptionally tender chicken.

Coated with a honey-sweetened, hot and spicy harissa paste, the bird is stuffed with couscous, apricots, dates, onion, almond, and garlic. That mix is spiced with cumin and cinnamon, and it gets a little jolt of heat from fresh, red serrano pepper. All those flavors are brought front-and-center by the enlivening tang of lemon juice.

And, amazingly, things just keep on getting better. That’s thanks to the complete contrasts produced by the jammy harissa paste that marinades and bastes the chicken. Essentially, its flavors come from roasted, coarsely ground cayenne peppers and red bell peppers that are seasoned with caraway, paprika, cumin, and coriander, and bound together into a paste with lemon juice.

Rubbed generously all over the chicken before it hits the oven, the paste is then used to give the bird a couple of good bastings as it roasts.

What you’ll find is that the honey in the paste helps to keep it right where you want it – on the chicken – rather than quickly running off into your roasting pan. The result? Well, it’s a win-win.

First, you get a slightly charred, caramelized, and crisped coating that locks in all the tender juiciness of the chicken. And at the same time, as the bird roasts to an oh-so-appealing crackle, the skin and melting fat beneath it absorbs the classic smoky, spicy, and fiery flavors of the harissa paste.

For our fabulous marinating/basting paste, I used a base of the ready-made variety. Of course, you could make your own, but simplicity is the name of the game here.

I did, however, add a few things to create a suitably sticky basting paste, and to emphasize its heat and spice. So, honey gave me the stickiness, olive oil helped with a crispier roasting, extra paprika added a darker red color, a little more cumin and coriander upped the spiciness, and cayenne pepper boosted the heat.

As for prepping the stuffing, well, that’s so simple that you can have it ready for the bird in 10 easy minutes There’s a little chopping of onion, garlic, apricots, and dates. You then add boiling chicken stock to the couscous, let it soak for a while, and mix everything together with diced almonds and the ground spices.

All that remains to do is stuff the bird, truss its legs together, coat it with plenty of the harissa paste, and let it stand for a while. Then it’s just a matter of roasting and basting in a hot oven for an hour or so.

Arranged in a snug, single layer in a roasting dish, the whole lot cooks with the chicken under a tight covering of silver foil for 20 minutes. It then gets another 20 minutes uncovered to crisp and color the potatoes, and add a little sweetening char to the peppers, onion, and garlic.

Just like the chicken, this is a dish full of contrasts. That initial covered roasting infuses the potatoes with a smoky warmth from the paprika and cumin, together with the mild, fruity heat of the jalapeños. Alongside that, you’ll have the combined earthy creaminess of softened red onion and garlic.

If you fancy a little more fire with your roasted potatoes, swap the jalapeños for a few whole, red serrano peppers. My folks prefer a milder heat, so the jalapeños were just dandy for them.

To round things off, there’s the even simpler, al dente green beans. They just get topped-and-tailed, sliced in half, and added to a bare covering of salted, boiling water in a saucepan. Simmer for six or so minutes and they’re ready to serve, perhaps with a sprinkling of sea salt and some butter slowly melting over them. Lovely. 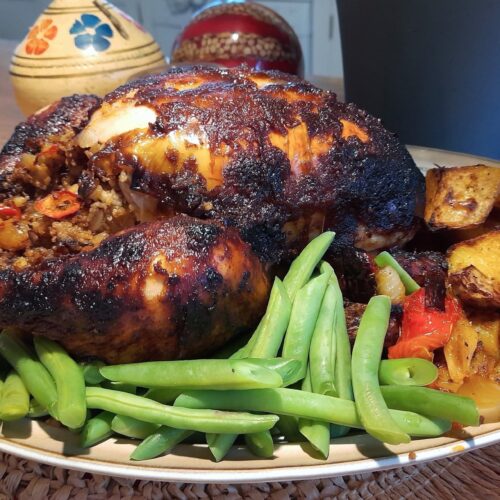 For the roasted potatoes

For the green beans