Here we have two of the most popular chilies on the planet. But how similar are they really? How much of a difference between the two is there in overall spiciness? Do they taste different? Are they easily findable in grocery stores?

Let’s break down some of the similarities and differences with our PepperScale Showdown. When you’re ready to learn more about these top chilies, be sure to read our full articles on them: the habanero pepper and the jalapeño pepper.

Habanero vs. Jalapeño: The heat

This is really a no contest between these two peppers. The habanero chili hands down kicks the pants off of a jalapeño. How much difference is there? 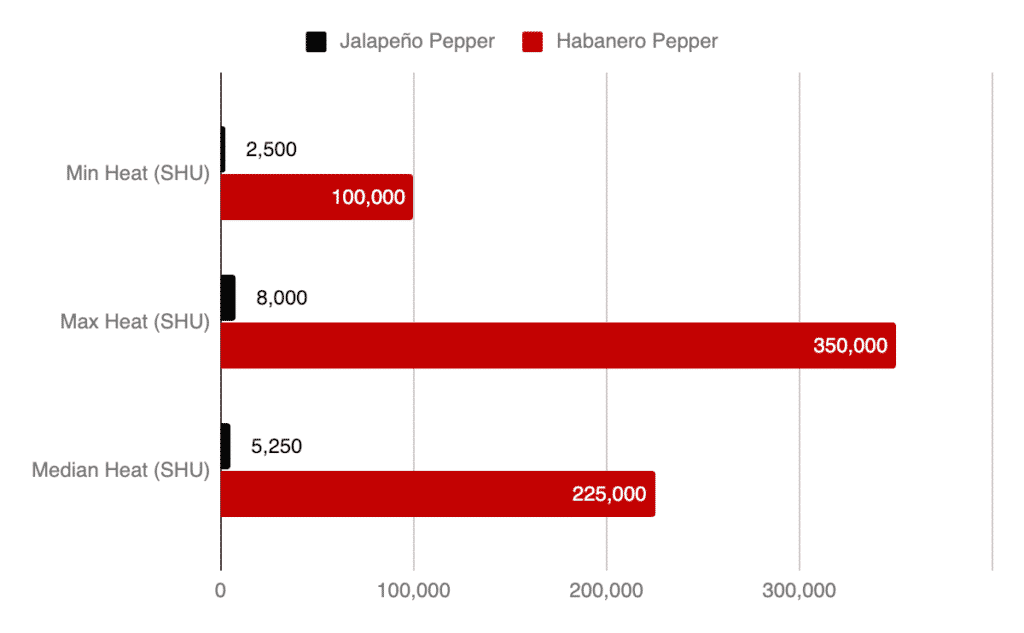 Let’s put this another way – the hottest habanero would be 140 times hotter than the mildest jalapeño. That’s the range of the heat difference, and it’s a big one. It may come as a surprise to some since many people think of jalapeños being a lot hotter than they really are. That’s just not the case, at least in terms of the overall pepper scale.

Beyond the heat, there is a definite taste difference. Habaneros have a slightly sweet heat to them. It’s one of the reasons this chili works so well in hot sauces, especially hot sauces that contain sweet ingredients like tropical fruits. Jalapeño peppers taste crisper, much closer to a green bell pepper in overall taste. Then there are dried and roasted jalapeños (otherwise known as chipotle) which take on an earthy taste perfect for barbecue and marinades.

Are they available fresh in stores?

The jalapeño pepper is arguably the most popular hot pepper around. Most grocery stores carry them, and you see them in more places than your local market these days too. More and more sandwich shops are carrying jalapeños next to the mild banana peppers as an option to spice up a sandwich. And spicy drinks, like the jalapeño margarita, are popping up in more restaurants. This is a level of spiciness that’s become mainstream.

The habanero is popular too, but it comes nowhere near the overall availability of the jalapeño. Some upper-end grocery stores may carry fresh habanero peppers, but it’s not a sight too common yet. You need to have a serious taste for spicy to really jump to the habanero, so there’s not a big enough audience yet for most grocers to carry, let alone the concerns from unhappy customers unaware of how hot this pepper really is.

How many products use these peppers?

Here’s where habanero peppers do get competitive with jalapeños in stores. For both habanero and jalapeño peppers, there’s a wide world of products surrounding them. There’s chili powders, hot sauces, salsas…you name it. Jalapeño chilies are the power behind the famous Sriracha hot sauce and many more, and habaneros are quickly becoming the ingredient of choice for some of the hottest hot sauces you’ll find on store shelves. If you’re shopping online, the variety difference is really negligible here. There’s a ton of products for both chilies.

There are definite differences between these two chilies, the heat being the biggest one. For that, and the taste difference, substituting a habanero for a jalapeño (or vice versa) is not typical. They don’t work interchangeably like a jalapeño and serrano pepper do (or a habanero and a scotch bonnet).

Still, we are talking about two of the most popular chilies around, so if your taste buds can handle habanero heat, find a place for both in your kitchen. They are two different worlds of spicy, but both deliver on their hype.