These three-chomp flavor-bursts are wonderfully addictive. Daltjie chili bites are fiery, spicy, crunchy, and smooth — all at the same time. And it’s their irresistibly moreish mix of tastes and textures that makes them such A1 appetizers.

A daltjie — sounds like dul-chee — is an outstanding vegetarian fritter that’s strongly linked with South Africa’s most well-known city-by-the-sea, Cape Town. More precisely, the link goes back over 300 hundred years — and much further away — to what was then called the Dutch East Indies, and is known today as Indonesia.

The centuries’ old, many-faceted story of how Cape Town’s cuisine became so influenced by Indonesia — and Java in particular — is, sadly, a dark one. It’s based on money-driven exploration, colonialism, and slavery. In a nutshell, it’s part of the bigger history of how the so-called Old World subjugated the New World.

In Cape Town’s case, early Dutch dominance resulted in the growth of a distinct, Muslim community that gave its name to a very specific style of cooking — Cape Malay.

Daltjies are a great example of Cape Malay cuisine’s big, bold flavors. For a start, the batter they’re made from is based on chickpea flour, and it really is worth making the effort to find some. Most Indian and Asian grocers will stock it pretty much as a standard item, as will a good whole foods store.

This flour gives daltjies their underlying flavor that’s slightly nutty and smoky — a great example of that combo being the subtle savour of a good ‘hummus bin tahina’. To add a touch more lightness, our daltjies also feature a little white bread flour, and some ‘lift’ from a touch of baking powder.

That chickpea taste-base is boosted by onion and spinach. It’s then spiced with cumin, cilantro, and turmeric. To be authentic, a daltjie’s heat should probably come from African Bird’s Eye chili, or peri-peri. But in a pinch, Thai chilies work as well.

Chilies were introduced to Southern Africa in the late 1400s by pioneering Portuguese explorers. Soon after, they were carried further East, where they were warmly welcomed by the cuisines of India, China and South-East Asia.

The secret to great daltjies — fry them deep, hot and fast

Texture is a key feature in a fine daltjie. A crunchily crisp, deep golden outside should surround a creamily smooth inside. That grand combo comes from flash-frying them over a high heat in about three inches of fairly neutral-tasting oil — sunflower would be my choice. And by fast, I mean not much more than 3 minutes in that hot oil.

And speaking of speed, prep time is also fast — maybe just ten minutes. This means — start to finish — you can have a plate of daltjies on the table in less than 20 minutes. And, as if that added bonus wasn’t enough, there’s another one. In the unlikely event you have any left over, these exceptional appetizers are surprisingly good when they’re cold. 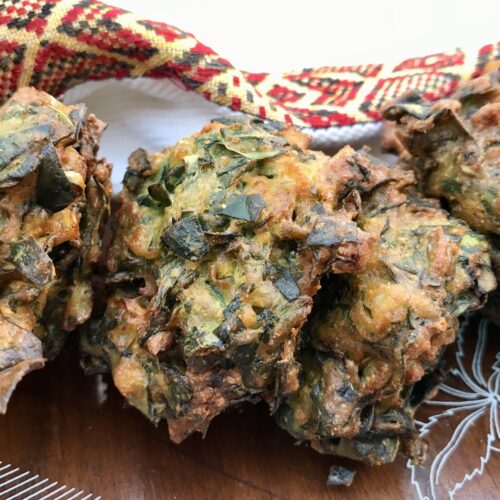 Gorgeous! Looks bright and flavorful, thanks so much for sharing.