Leftovers? Don’t use any in our chorizo frittata served with chili jelly, please. And don’t expect any after you’ve served it. This is a super special omelet with no space for refrigerator oddments. Instead, there’s that spicy chorizo, mushroom, potato, cayenne chili, and goat’s cheese. Special? Very. This is one memorable breakfast meal.

Obviously, there are eggs. Good, big, free-rangers. Beaten together with Parmesan, heavy cream, milk, tarragon, and a little salt and black pepper.

It starts out slowly on a stovetop skillet and finishes fast under a glowing broiler that crowns it with a golden top. Outstanding when eaten hot, it’s just as good cold. Yep, just as good. Provided you can wait that long.

I was surprised that so many recipes praise frittata as the perfect place for remnants. Like it’s their happy, last chance saloon before going into a stockpot (honestly, unlikely), Fido’s bowl or — however guiltily — the trash.

What makes our chorizo frittata so good is that all the fillings — the chorizo, cayenne peppers, mushrooms, chickpeas, and potatoes — are prepared specifically for the frittata. They’re not added as use-me-up ingredients just because there happen to be some looking for a home.

Give your frittata the respect it deserves, and you’ll be delighted with how generously it rewards you.

The wonder of eggs

I’d rather drop and smash a decent wine glass than an egg. The food writer AA Gill first made me realize that. The awful remorse hits you as soon as the egg hits the floor. If ever there was a food stuff that warrants a ‘handle with care’ message, it’s eggs.

A carefully soft-boiled pair with hot buttered toast is one of the finest breakfasts I know. And yet, in complete contrast, with some good mayo and a sprinkle of salt and pepper, hard-boiled eggs are the embodiment of really fine picnic food.

And in a good frittata, the eggs are a like a stage on which the other ingredients get to showcase their very different flavors and textures.

It might be tagged as an omelet, but it certainly doesn’t look or taste like one of those delicately folded, fluffy French ones.

If eggs are this chorizo frittata’s body and soul, these fillings are its heart

Let’s start with the chickpeas. Fried fast in a bit of butter in a big hot skillet they take on a deeper color and get a nicely crispy outer. Earthy, smoky, and a little crunchy, they’re grand with the heat of the cayenne peppers and the richness of thick slices of chorizo.

Those slices also get a little of the same fast and hot treatment in the skillet. As their spiciness melts out, they’re joined by some matching mushroom slices and par-boiled potato.

This early work with the skillet means the fillings are all at their flavorsome best before being unified into a single entity — your frittata — by the eggs, dairy, salt, pepper, and tarragon. Now there’s a very distinctive, aromatic herb with its bright edge of aniseed. It has to be my favorite herb with beaten eggs.

A few minutes in the skillet starts to set the eggs and then, once topped with a few rounds of goat’s cheese, it’s time to finish the cooking under that hot broiler. Result? Your frittata will have enough body so that you can easily eat a quarter slice of it with your hands without it falling apart.

Serve it with our chili jelly (see the recipe below the chorizo frittata recipe), and you will be relishing a true gourmet meal, not a breakfast mix-and-match. 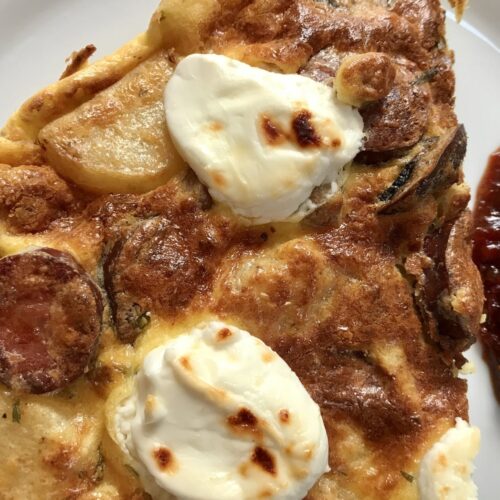 To make this frittata, you’ll need a big, deep-ish skillet with a flameproof handle – it’s going to go under the broiler/grill for the final cooking. I used a heavy, metal-handled, 12-inch one that’s a good two inches deep.

The chili jelly: A real treat in its own right

Cayenne or serrano chilies, cherry tomatoes, garlic, and Spanish onion get melted down in a pan with a little olive oil, then gently simmered with smoky demerara sugar, a little oriental fish sauce, ground cumin and paprika, and some cutting lime juice.

Hot and sweet but with real depth to its layers of flavor, this jelly might make you think twice about ever reaching again for your favorite tomato ketchup. That’s why I make enough to fill a 16-ounce jar that’ll keep for at least for a week in the refrigerator. It’s just delicious on the side of our chorizo frittata. It’s that sweet and spicy combo.

Hallo Matt, your poetic description of a “simple” omelett is so exciting that I will make it tomorrow morning, just to prove that an omelett is not made only of remnants, as I did till today. Here in Brazil there are some different ingredients like linguiça calabresa instead of chorizo español or feta cheese, because of lack of goat cheese in the fridge. Chikpeas are readily cooked in the freezer, not from can. Serrano chili will be clearly an important ingredient. Thanks for this invitation to spicy food. Here in Bahia they aks you if you like hot or cold… Read more »