Cholula Original Hot Sauce is a tried-and-true generational Mexican hot sauce that’s sold around the world. It’s not too spicy with plenty of vinegar zing — a combo that’s meant to appeal to the masses. But how well is that heat and vinegar combo balanced? What other favors does it bring to the table? And is it as usable as many of its supermarket-shelf competitors? Let’s take a dive into Cholula and see what it’s all about. 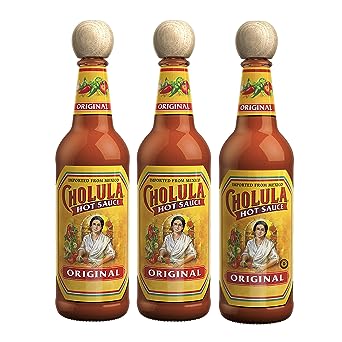 Heat Level: Upper-mild to low-medium (1,000 to 2,000 SHU)
Pros:
Cons:
Buy Now
We earn a commission if you click this link and make a purchase at no additional cost to you.

Let’s jump to the ingredients in Cholula Original Hot Sauce first — there are few, but how they blend is pretty spectacular. The ingredients list: Water, peppers (arbol and pequin), salt, vinegar, garlic powder, spices, and xanthan gum.

Seriously, Cholula Original Hot Sauce is a flavor explosion — even with only seven ingredients on that list. It’s mainly due to the brand letting the unique flavor in those chile de arbol and pequin peppers shine.

On first taste, you get that vinegar tang, but it’s not overwhelming. Rather, it’s just enough tanginess to satisfy, and it allows the nuttiness of the chile de arbol peppers and the citrusy, smoky flavor of the pequin peppers to take center stage. That smoky undertone, especially when mixed with the sweet pungency of the garlic powder, complements the acidic side of this hot sauce so well.

On the sodium: Cholula Original Hot Sauce rings in at 110 mg of sodium per teaspoon serving (or 4% of your daily allowance.) There’s definite saltiness here, so take care on adding more to a dish when you use Cholula Original. The hot sauce alone, especially with how mild it is, may just bring enough saltiness to the table.

So, the capacity for some significant heat is here. That is, if “water” didn’t headline the ingredient list. Really, the heat is tempered down a lot due to the dilution. According to Cholula, its original hot sauce lands between 1,000 to 2,000 Scoville heat units, putting it at an upper-mild to lower-medium level of spiciness. That puts Cholula Original Hot Sauce in line with Sriracha (1,000 to 2,500 SHU) and slightly below the heat of Tabasco Original Red (2,500 to 5,000 SHU).

It’s a very eatable level of spiciness, for sure. And it’s one of the reasons this hot sauce has such mass-market appeal. And chili peppers (as we preach here at PepperScale) are just as much about the unique flavors they bring to the table as they are the heat. And there, Cholula scores a knock-out. The heat balance is just enough to make its presence known without getting in the way of the delicious flavors pequin and chile de arbol bring to the eating experience.

The spiciness hits you mid-bite, and it simply warms up your tongue. Even as you eat more and more, it really never lingers too long or moves to the back of the throat. Overall, it’s about as family-friendly as a hot sauce can get, providing a kick you can feel that won’t scare anyone off, even over time. It’s perfect as a table hot sauce for everyday use or for gatherings where you’ll have a wide spread on heat tolerance.

Like most mass-market hot sauces, Cholula Original scores very high on usability. It’s just made to be a daily driver. It’s a perfect complement to pizza, rice, potato dishes, and eggs of all types. Likewise, it’s a natural fit for Mexican food of all kinds (seriously, that smoky, nutty flavor is pure win with tacos and burritos.)

Cholula Hot Sauce is also fantastic to cook with, and you’ll actually get more of the flavors released when you do. I cook my chicken in this sauce, and it leaves behind such a nice nutty flavor with a bit of tang from the vinegar. It really brings just the right amount of spice every time I use it.

One note on the consistency: Water tops Cholula Original Hot Sauce’s ingredient list, but overall this isn’t a watery hot sauce. It’s reasonably thick, so it sticks where you put it. It won’t water down your food or create inconsistencies in the heat due to immediate dilution.

Cholula Hot Sauces are about as mass-market as you get, so they aren’t collectible in the traditional “scarcity” sense. That said, you’d be silly not to have a bottle in your collection just for the flavor alone. It’s that tasty. It has such a loyal following for good reasons.

The label is classic Mexican in style, featuring a woman dressed in traditional Mexican clothing, along with garden-fresh vegetables (including chili peppers) dangling to the side. All of this in front of a classic arched window. It screams authentic.

Fun fact: Cholula is one of the major sponsors for the Texas Rangers, New York Mets, Chicago Cubs, Cincinnati Reds, Washington Nationals, and Miami Marlins. So if you love baseball and you live in one of those cities, you’ll see your fair share of Cholula at the stadiums.

Buy Now
UPDATE NOTICE: This post was updated on October 30, 2021 to include new content. It was originally published on July 20, 2021.