Heat, stir, chill, and roll. That’s all it takes to create the divine pleasure of our gorgeous spicy chocolate chili truffles. And with a little more effort, you can add an extra layer of super-luxury — a praline coating.

When something’s this good, it’s hardly surprising that there are a few colorful claims about who actually invented the chocolate truffle.

There’s a popular story from the 1920s that tells how its origins lie in a foolish mistake made in the kitchen of one of the most famous chefs ever — Auguste Escoffier. The tale says that one of the great chef’s apprentices mistakenly mixed hot cream into a bowl of chopped chocolate. Escoffier’s angry reaction was to call the apprentice a ‘ganache’, a sort of French slang for a fool. And, according to this bit of folksy kitchen lore, that’s how a combo of heavy cream and chocolate got tagged in culinary jargon as ganache.

Back to the angry chef. When Escoffier calmed down a bit, he apparently thought the cooling, thick mix could perhaps be happily salvaged by rolling into little balls. Then what? Well, Escoffier decided to roll the rounds in cocoa powder — and to call them what the finished result sort of resembled — truffles.

It’s a cute story, but probably not the true story. I say that because a London chocolate store called Prestat had been making and selling what they insist was their invention — chocolate truffles — since 1902. And they still sell them to this day.

Their claim to fame is that these delights were the brain-child of a pastry chef called Louis Dufour from the city of Chambéry, in the south-east of France. And this story is also based on a bit of an error. In the run-up to Christmas 1895, Louis discovered he had a rather tricky problem. He’s seriously short of chocolate for making his usual festive treats. Oops.

To avoid disappointing his chocaholic customers, he cunningly concocts a mix of custard, cocoa, and vanilla, which he rolls into small balls. He then coats these orbs with melted chocolate — thereby making the most of what little he has — and rolls them in cocoa powder. Voila! Louis’ truffle-looking choccies save the day — and keep the proverbial till ringing.

And it seems the till rang a lot at Louis’ place — possibly enough to prompt his brother, Antoine, to hop over to England and open a chocolate retailer in one of London’s poshest streets. And the place’s piece de resistance? Yep, choccy truffles.

There are bold flavors in our chocolate chili truffles

When it comes to our riff on chocolate truffles, it really doesn’t matter what the true origins may be. That’s because these gorgeous treats are strictly for grown-up tastes. They’re certainly nothing like anything you’ll find in the kiddies’ candy aisle.

I’ve no idea who thought of adding the rich warmth of chili to the flavor-depths of a ganache that’s made with high-class dark chocolate and heavy cream. But I’m glad they did. So, before the cream meets the chocolate to make that luscious ganache, our recipe starts by infusing the gently-heated cream with the fruity, smoky heat of a dried arbol chili.

We then take this rich, creamy heat in very different directions by adding the herbal, minty-citrus flavor from a few green cardamom pods, and the earthy, aromatic sweetness from a stick of cinnamon.

These two spices have long been known to partner exceptionally well with dark chocolate, acting like spotlights to pinpoint tastes that are simultaneously intense and roundly mellow.

As for the chocolate in our spiced ganache, well, that’s got a cocoa content right up there at 70%. And it’s quite different from what we might call bar-chocolate. Known as couverture, this is premium quality chocolate — both white and dark — that’s made specifically for the sort of really rich, high-gloss coatings and fillings that have to come from the very top-drawer. It’s usually sold in packs of little, easily melted ‘drops’. For couverture, there’s a couple of big-name brands like Valrhona and Callebaut, but I used a variety that I’ve grown to trust from a reputable chain-store.

And then there’s the praline coatings…

Now, no offense to the truffle-creating claimants, but it seems a little dull to coat dark chocolates with cocoa powder. To me, that’s like putting ketchup on tomato soup — why do it?

So, for some contrasting flavors and textures, our balls of lightly spiced ganache are coated with ground praline. That’s an easily made mix of almonds and caster sugar that gets some sugar-melting heat to make a sort of caramelly, nut-brittle.

Ground fairly fine in a pestle and mortar, the praline makes a slightly glittery, slightly crunchy covering for our chocolate chili truffles. I coated half of the truffles with that simple praline, and the other half with a mix of the praline and finely chopped white chocolate — from a pretty good bar of plain, white chocolate.

Richly delicious? Oh, yes. Intensely so. With after-dinner coffee — or even with a good cup mid-morning — you’ll probably find that two of these are all the treat you need. 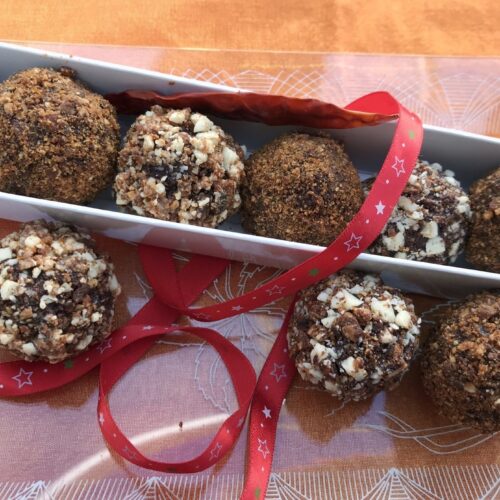 For the spiced ganache

For the two praline coatings

Rolling the truffles and coating them

I’m happy to keep them chilled — and covered with plastic wrap — in the refrigerator for a couple of days. I like mine cold, but if you prefer, you can let them warm a little outside the refrigerator before you serve them.