Our out-of-this-world chicken satay with peanut sauce may well be the happiest surprise of your summer. To create one of the supreme main course pleasures of Southeast Asian cuisine, be sure to include the delicious sweet, sour, and hot cucumber relish (thanks to Thai bird’s eye chilies.) Our chunky peanut sauce, too, packs a little heat, with the addition of serrano peppers.

Back in the mid-1980s, a pretty little paperback cookbook by Jennifer Brennan changed the way I cook. For me, Thai Cooking turned the exotic into the accessible. As well as opening the doors to Thai food, it gave me confidence to attempt the cookery of other, very different, far-off, places. It turned my kitchen into a sort of travel-machine that allowed me to explore the world’s flavors.

And it seems that — far beyond my London apartment — this wonderful book influenced many others in similar ways. At a time when the popularity of Thai food was just taking off in America, a lovely 1981 New York Times article by Mimi Sheraton heralded Brennan as “an outstanding champion of Thai cooking on the West Coast.” Outstanding indeed.

Our classic satay recipe comes almost entirely from Thai Cooking. And there’s good reason for that. I’ve made this more times than I can remember, and it always — and I mean always — draws genuinely astonished praise from the kind, food-savvy friends I’m lucky enough to share it with.

You see, Jennifer Brennan’s satay leaves all others in the shade. The contrasting tastes, textures, and temperatures are so completely different, yet they work in perfect harmony with one another. Each element in this satay plays its own starring role. And here’s how they each perform.

Before being threaded onto skewers and seared over high heat, thin-ish slices of chicken breasts spend a little time in a subtly flavored marinade of fish sauce, tamarind, garlic, onion, and ginger. These might be strong flavors, but they’re used in modest quantities, and are nicely softened by the rich sweetness of palm sugar and a little water. The result is a gentle marinade that’s well suited to highlighting rather than overpowering the delicate flavors of good, free-range chicken breasts.

The thick, darkly rich peanut sauce is something special in its own right. It gets its fiery kick from some roughly chopped green serrano chilies, but its keynote, nutty, hot flavors are balanced by palm sugar and the creaminess of coconut milk. Fish sauce and soy add depths of salty savor, which are accentuated by citrusy lemongrass and the crisp tartness of fresh lime juice.

And as for the cool, cucumber relish, well, this is a bowlful of highly distinct contrasts. All at the same time, it’s sweet, sour, and hot — surprisingly hot, thanks to a goodly amount of flaked, dried Thai bird’s eye chilies.

Daring to develop a classic

Over the years, I’ve added one ingredient to the recipe and brought in substitutes for two others. Instead of using peanut butter in the sauce, I swop that for whole, dry-roasted peanuts. And I prefer a dark, mushroom-flavored soy in place of the sweeter, traditional, Indonesian soy sauce called kecap manis.

I like whole peanuts for the additional flavor and color provided by their skins, and the fact that I can control how chunkily I grind them for the sauce. The mushroom soy is there for its big umami taste and the extra depth of dark color that it gives the sauce.

And the one addition? I add grated ginger to the chicken’s marinade to give a little more spicy warmth to its flavors. Other than these small and hopefully forgivable amendments, I follow the long-trusted, pioneering guidance of Jennifer Brennan.

A trio of must-haves — palm sugar, lemongrass, and tamarind

It’s well worth taking the time to find these three essential ingredients because they produce some of the most distinctive — and complimentary — flavors in Thai cooking.

Palm sugar adds a rich, caramel depth to the peanut sauce and to the chicken’s marinade. Aromatic lemongrass with its gentle, citrusy overtones is, for me, the quintessential taste of Thailand.

And then there’s fruitily tart tamarind paste. On its own, nothing else tastes like tamarind. Imagine intensely sharp, sour plums mixed with Worcestershire sauce, and you’ll have something similar — not the same, but similar. That’s partly because tamarind is a key ingredient in that particular sauce.

Bring all three of these must-haves together, and you’ll be well on your way to enjoying what I’d seriously describe as the ultimate, classic satay. 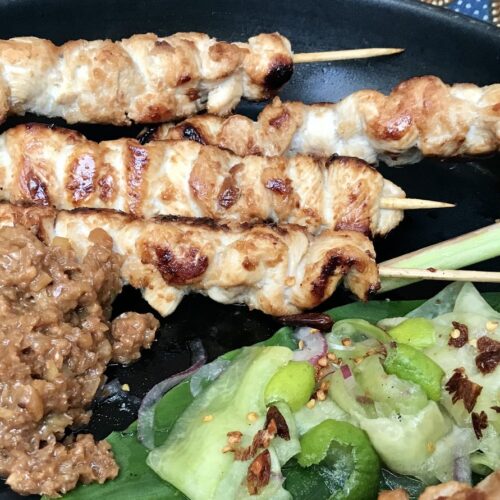 For the chicken’s marinade

For the peanut sauce

For the cucumber relish

* I prefer to do this in a big, 12-inch skillet set on a high heat rather than on the bbq. Why? Well, it’s partly because I’m better at a kitchen stovetop with a skillet, and partly because I’m cooking the peanut sauce there anyway. I do also find that the direct heat of a bbq can tend to dry the chicken and reduce its succulence. To drink? On a brightly happy summer’s day, my choice would be that fine Thai beer, Singha. Nicely chilled and poured with a lovely creamy head for me, please.