This comes fully loaded with Sicilian flavors. In its glossy, smoothly rich sauce, caponata is savory, sharp, sweet, salty, and sour. Serrano peppers light its fire, and a golden focaccia loaf turns it into an elegantly simple lunch or supper.

Bewitching. In that lovely word’s most entrancing sense, that’s caponata. There’s something magical here, a sort of culinary wizardry that transforms simple ingredients into a dish that brightly spotlights each of the five elements of taste.

Caponata unites that range of distinctive contrasts so astonishingly well that it’s ranked among the classics of traditional Italian cuisine. For a dish that’s been adored for so long and so widely praised, it’s surprisingly easy to make. A little frying of a few very easily prepped ingredients is followed by low-and-slow simmering. And that’s it. The enchanted dish is done. Let your caponata sit for an hour or two – so the flavors come into full bloom – and it’s ready to serve.

For a dedicated carnivore like me, the absence of meat heightens my surprise at how good this is. So much so that I wondered what I’d make of it blindfolded. Well, I’d be trying to work out what meat had been used. That’s because caponata is so delectably savory and so packed with the umami hit of, say, the charring on a fine, succulently rare steak.

A lot of that no-meat surprise is down to the essential, primary ingredient: eggplant. I’ve seen eggplant referred to as ‘vegetarian meat’ and that might be a reason why caponata revolves around it. Once golden-fried in biggish chunks, it’s slowly simmered with everything else until its increasingly creamy texture takes on caponata’s hallmark blending of bitter-sweet flavors.

Known as agrodolce in Italian, this fusion of starkly contrasting flavors is a centuries-old feature of Sicilian cooking. It’s all about creating balances and nuances that are drawn from a dizzying wealth of colonizing culinary influences.

As he scoots around Sicily, Matthew Fort brings all that beguiling history to vivid, recipe-filled life in his 2008 book Sweet Honey, Bitter Lemons: Travels in Sicily on a Vespa. It’s a history that’s still evident in the island’s food today, and it stretches back almost three millennia, spanning cuisines of the Phoenicians, Greeks, Romans, Goths, Moors, Normans, and Spanish.

In caponata, the fusion works like this: red wine vinegar, capers, and green olives provide the prominently sharp, salty, and sour counterweights to the syrupy, natural sweetness that comes from gently frying the celery, red onions, and cherry tomatoes. Their natural sweetness is then accentuated by sugar (no surprise there), raisins, and a no-frills tomato purée known as passata.

At the same time, that gentle, barely-coloring frying also brings out the inherently savory, umami tastes of the onion, tomato, and celery. This savoriness then gets its own boost from how you work with the eggplant and zucchini to maximize their umami output, by fiercely sizzling them hot and fast in vegetable oil until their cut sides turn the color of golden sunshine.

Before they hit the oil, the chunks of eggplant get a generous coating of salt to draw out some of their water content and beef-up their meaty texture. The zucchini doesn’t get the salt-treatment. They’re peeled in stripes, sliced into inch-thick rounds, and their raw firmness gets locked in when they encounter the high-heat oil.

Once the frying’s done, all the ingredients get mixed gently together in a big pot with the thinly sliced fresh, red serranos, and the whole lot is left to simmer very slowly under a lid for 40 minutes or so. If you can find them, the home-town chilies of southern Italy, Calabrian peppers, would be molto autentico, but serranos or cayennes will fit in perfectly with your caponata’s fully loaded flavors.

You’ll find that the slow, steamy, simmer allows the eagerly absorbent eggplant to fill with flavors from its companion ingredients. And since the heat is low and slow, the capers, celery, raisins, onions, and tomatoes will keep much of their own texture and flavor. As for the chilies, they’ll keep almost all their fresh vibrancy because the simmer is all the cooking they get.

You’ll also find that the passata, vinegar, and sugar have mellowed down into a shiny, jammy sauce that flows silkily throughout your caponata. Let the pot cool to room temperature, and the magic is complete and ready to be revealed.

Now, many caponata recipes call for a sprinkling of toasted pine nuts or almonds as a sort of final garnishing. My opinion? Well, this dish is already so jam-packed with flavors that I don’t think it needs much else added to it.

Having said that, a few green olives alongside are lovely. And I do like a little roughly torn mint scattered on mine – as much for its cool, aromatic sweetness as for its burst of fresh, silvered green against a caponata that glows like mesmerizing embers.

Warm from the oven, its top glistening with olive oil and shiny crystals of salt, an easily made focaccia loaf is a wonderful, meal-making partner for your caponata.

Break off generous chunk of it and you have an edible spoon for scooping caponata from your bowl until not a trace of it remains. 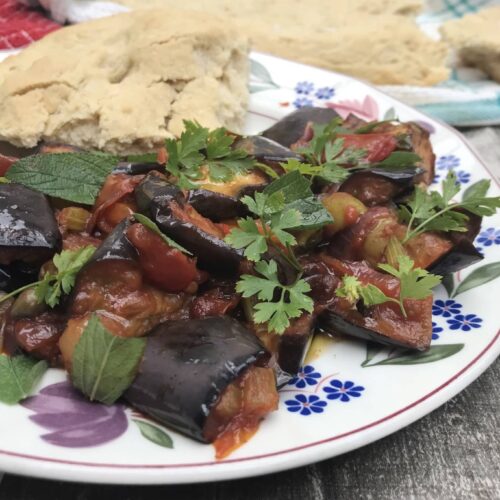 I’d start with the focaccia because its dough needs to rest and rise twice for 60 minutes each time – 2 hours in total – before you bake it for 25 minutes. That means you’ll have plenty of time to make your caponata and for it to cool to room temperature before you serve it alongside your lightly golden loaf of warm focaccia.