First things first. Bunny chow has nothing to do with Flopsy, Mopsy, and Cottontail. Or China for that matter. It’s simply spicy Indian curry served in a hollowed half-loaf of bread. In our recipe, it’s a delicious lamb curry that takes center stage.

So, why bunny? Well, it’s most likely linked to the word bania. That’s a class of Indian merchants and traders involved with stuff like import and export, storekeeping, finance — and eateries. And the link to Durban? It stems from the city’s extraordinary ties with India that date back to 1860. That’s when colonial Britain began bringing in cheap labour from India to work on sugar plantations that were expanding across areas surrounding Durban. Sad to say, it’s a bleak tale about the abuse of mighty colonial power.

Happily, there’s an upside to that dark story. From those harsh, oppressed beginnings, the Indian community grew and prospered. And it did so to such an extent that Durban is often ranked as the city with the largest Indian population outside the motherland itself.

Not surprisingly, the place is renowned for offering its own, very distinctive riff on Indian cuisine — especially fiercely hot, vibrantly red curries. Although this long-established culinary influence became synonymous with Durban’s cuisine, by far its biggest impact was on one specific type of take-away food — curry-in-a-loaf.

Nobody knows for sure when this novelty was first served, who served it, or who named it. It probably first appeared in Durban during the late 1940s, and its primarily black, poor, and apartheid-oppressed purchasers tagged it as bunny chow — bania food.

When something’s this good to eat, it doesn’t stay rooted in one place. Commonly known simply as ‘a bunny’, nowadays it’s popular right across South Africa.

The first bunnys were intended to be inexpensive, filling, portable and eaten with your hands. To keep prices low, the curry filling would have been a meatless mix of Indian spices, chili, sugar beans, potatoes, tomatoes, and onion. Handed to you in a sheet of newsprint, there were no fancy, budget-busting frills like plates and cutlery. The bread would have a been a white, standardized, ‘government’ loaf. This was halved and its centre hollowed-out to create a sort of square-sided bowl to hold the curry.

Today’s bunny can be very different creatures. How much bread you get is basically determined by the size of your appetite — and your billfold. Same goes for the fillings, which can range from common-or-garden basic to designer glamourous.

Our recipe is for a proper, fiery, Durban classic — a ‘mutton bunny.’ Sometimes known as a ‘half mutton’, it sticks to tradition with a fresh-as-possible, half-loaf of plain, white bread for each (hungry) diner. The hollowed halves are then filled with the type of rich, hot, and highly spiced lamb curry for which the bunny’s home town is so rightly famous.

It’s very much a meal for sharing

My top mate, Mike, was raised in Durban, and he’s a big bunny chow fan. In his early twenties he worked construction, and Friday was the day for sharing lunchtime bunnies with buddies — two half muttons for four eaters.

And there was protocol. You ate with your hands, taking turns to scoop up the curry with pieces of bread torn from the loaf. Most importantly, you were careful to eat a politely equal mix of lamb, potato, sauce, and bread.

As an added bonus to an immensely satisfying meal, that protocol adds another, delightful layer of pleasure. And that’s what bunny chow is really all about. 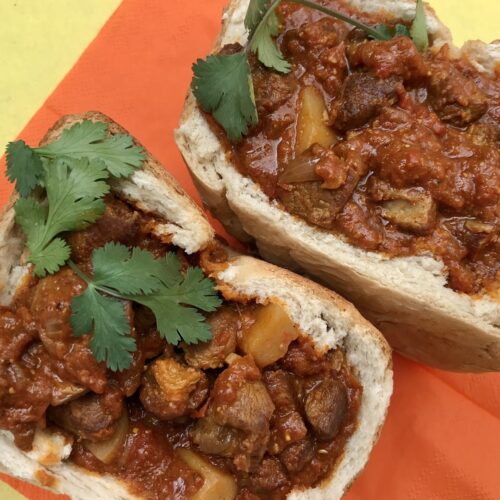