This marvel from Marseille, bouillabaisse with rouille, is sunshine in a bowl. No wonder it’s one of the brightest stars in French cuisine. It pairs broth-poached seafood with a fiery sauce of cayenne chilies, roasted bell peppers, garlic, olive oil, and lemon juice.

In his enjoyable guide to French regional cooking, Floyd on France, Keith Floyd points out that fish stews are deeply loved throughout that country. He emphasizes his point by offering recipes for nine provincial varieties, but — and I’d say rightly — he puts bouillabaisse with rouille right up front.

A marriage made in heaven — bouillabaisse with rouille

The French word for rust — rouille — is what gives this accompanying sauce its color-coded name. Rouille is traditionally served with bouillabaisse because they really do make the perfect couple. And it’s their diametric contrasts that bind them together in such a sensational pairing.

This is a dish that proves, beyond all doubt, the truth of the adage — opposites attract. Put these two together, and they lift one another to a higher level.

On the one hand, you have a saffron-enriched broth with a base of onion, fennel, tomato, garlic, thyme, bay leaves, dried orange peel, and olive oil. The seafood — fillets of white fish, plump shrimp tails, and half-shell mussels — is carefully simmered in the broth until it’s just cooked through. That scant simmer means each seafood element keeps its own distinct flavor and texture.

Those subtle, oceanic flavors of the bouillabaisse are then brightly lit by the deep, rich, smoky heat of the rouille with its roasted bell peppers and cayenne chilies. The balancing contrast with the seafood become even more clearly delineated by the rouille’s rusty color and its creamily thick smoothness. That consistency comes from a combo of the rouille’s thickening breadcrumbs, and the body-building effect of slowly adding generous amounts of olive oil during the sauce’s final mixing — in a manner similar to making mayonnaise.

And the wonders keep on coming

Even though this is a seriously enjoyable and impressive dish, it’s surprisingly easy to make. It might be from the top drawer of French cuisine, but there’s nothing at all complicated about its preparation, its cooking, or its presentation.

And time-wise? About an hour, all told. Yep, that’s right. You can easily have this on the table — with some fine, crusty baguettes — in around sixty leisurely minutes.

It might be hard to believe, but there is a final, perhaps equally pleasant surprise. This is not an expensive dish. It was originally prepared as a way for the fisherfolk of Marseille to relish the less money-making, marketable components of their catch. And they became astonishingly good at doing just that.

Now, there are so-called deluxe bouillabaisse recipes that call for a few whole lobsters and equally high-end white fish like sea bass. For me, these variants miss the whole magical point of a dish that is essentially about transforming fairly ordinary seafood into something that is truly extraordinary.

A word about the non-oily, white fish fillets

I used two varieties — hake and firmer-fleshed monkfish. That gave me an appealing mix of textures and flavors, but a similar combination of relatively inexpensive and readily available white fish will be just dandy. If you can find fresh fillets, so much the better, but I very happily used frozen. 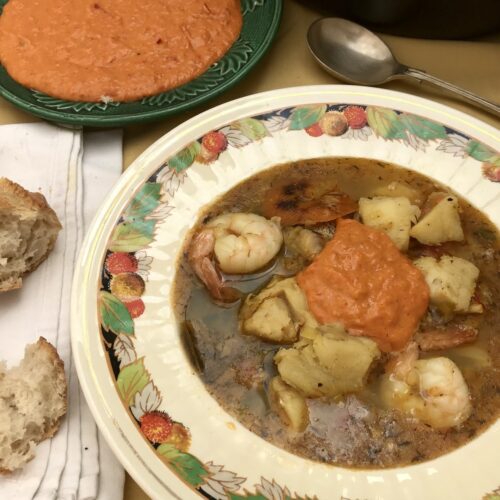 I like to present the bouillabaisse in its pot at the table, along with a good-sized ladle so that diners can help themselves. Same goes for the rouille — people can add a generous serving into their brimming bowls. Big smiles all round are then pretty much guaranteed. As for that crusty bread, encourage people to break off their own chunks. These are just grand for dipping into the rouille — and for some thorough mopping up of the bouillabaisse’s broth. And here’s another piece of happiness. You may well find there’s some rouille left at the meal’s end. That’s grand because it goes really well with a whole host of other dishes, and it’ll easily keep sealed in the refrigerator for a couple of days.