On its Caribbean-island home of Guadeloupe, they call it ‘bo-keet’. Fillings vary enormously, but what’s constant with bokit is the gorgeous, deep-fried bun. Ours are packed with juicy, hotly spiced, slow-roasted pork, and served with a traditional, lime-sharpened Creole dressing fired by bird’s eye chilies.

To call this a sandwich misses the mark. By a lot. The difference is really all down to the bun. Simple to make with simple ingredients, the bun is the signature that sets a bokit far apart from other foods in the filled-bread family.

And the bun’s distinctive signature is how you cook it. Unlike, say, hot dog rolls or burger buns that are oven baked, with bokit, you fry the bun hot and fast in plenty of oil. It’s a process similar to cooking a good doughnut, and it only takes a few sizzling minutes to go from dough to delight. And the texture? I’d put that somewhere between a French baguette and a classic flatbread like Indian naan.

There’s also a strong Indian influence in our bokit filling. Guadeloupe is noted for a spice mix called ‘Colombo powder’. It apparently gets its name from the biggest city in what was once tagged Ceylon – Sri Lanka.

And the Indian connection with Guadeloupe? That certainly comes from the days when colonial France began using indentured, mainly Tamil, labour from south India to work primarily on their sugar plantations in the French West Indies.

In a sadly dark passage of imperial history, between 1853 and 1883, over 44 000 ‘contract workers’ were shipped from India to Guadeloupe and its sister-island, Martinique. This demand for labour had particularly bittersweet roots – France had abolished slavery in 1848, and its emancipated, mainly African, slaves preferred not to continue toiling for their former owners.

Fortunately, times change, and a positive, culinary influence has flourished since those unhappy beginnings. Just like the traditional ‘curry powders’ of Sri Lanka and southern India, Guadeloupe’s Colombo powder is headlined by ground cilantro and black pepper. Cumin, cinnamon, and cardamom are the typical backing vocals, adding to this curry powder’s deep, warmly rounded savors.

The spices for Colombo are often roasted before being ground and there are many variants that include fennel and mustard seeds, fenugreek, cloves, and allspice. For our slow roasted pork’s cook-in marinade/sauce, we’re keeping things simple and starting with a few ready-ground essentials.

One of the first additions to those sauce essentials are the oh-so-Caribbean chilies. In her book, Creole Kitchen, Sunshine Flavours From the Caribbean, Vanessa Bolosier says that habaneros are the primary piman – Creole for chilies – in Guadeloupe’s cuisine, but piman-zozyo, bird’s eye chilies, also feature. And that’s what we’re using to give our saucy marinade its fiery kick. Creole Kitchen: Sunshine Flavors from the Caribbean
$28.00
Buy Now
We earn a commission if you click this link and make a purchase at no additional cost to you.

So, we now have a hot, Colombo-spiced base ready to be blitzed into a paste with onion, garlic, ginger, thyme, Demerara sugar, and lime juice. Once the pork is thoroughly coated in that glorious mix, it’s heading for a few hours’ tightly-sealed roasting in a moderate oven. Result? Pull it apart with your fingers, cut it with a soup spoon, sigh with pure pleasure at its wondrous depths of flavor.

That fabulous filling gets a big helping of inspiration from another, possibly more famous Guadeloupean dish, Colombo de porc. We use the same cut of pork, Boston butt, a.k.a. pork shoulder, but slow-roast it whole, rather than cutting it up and cooking it casserole-style with carrots and potatoes.

The dressing for our bokits gets its name from a brand of kitchen knives that are regarded as indispensable in Guadeloupe. Made in France and still going strong today, ‘Couteaux Chien’, dog knives, owe their moniker to the blade-embossed logo. That’s a cartoonish canine that reminds me a bit of Tin-Tin’s Snowy. First manufactured by Sabatier in 1910, this is the knife that christened a regionally famous Creole dressing – chien sauce.

Hot, salty, sharp, and garlicky, this versatile dressing also features a little onion, a couple of bay leaves, and plenty of fresh parsley and chives. Everything’s very finely chopped (to be super authentic, you know what knife to use) then stirred together with freshly squeezed lime juice and finished with a little olive oil.

Spread generously on the nicely absorbent insides of your bokit’s halved bun, the bright immediacy of this sauce is a wonderful counterpoint to the richly fatted spiced pork.

I like this finishing touch for the variety of very different flavors and textures it adds to a bokit.

I cut ripe tomatoes into slices about ¼ inch thick, with each bokit getting four slices. Same story for the cucumber, except that I cut those slices much thinner – about an 1/8 inch thick.

As for the lettuce, I used a few fresh, crisp leaves from a very convenient pack of mixed salad leaves. Lovely. Just lovely.

How many bokits per person?

Our recipe makes six bokits. Now, these are pretty substantial, and I reckon one-and-a-half is ample for a hungry, good eater. Or maybe just one.

I’d make six bokits for four people – and let folks politely decide for themselves how best to share them. 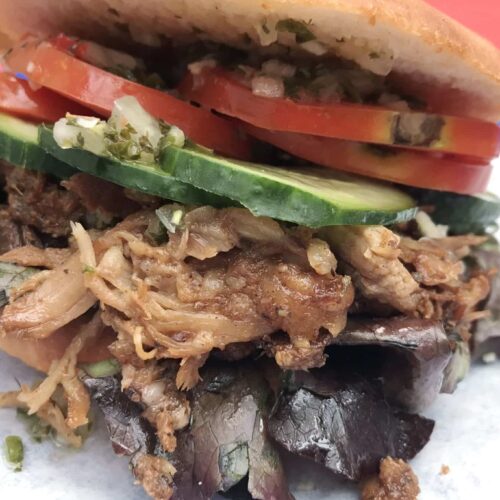 For the Creole chien sauce