For magnificently rich flavors and super-chic simplicity, unleash this spicy bacon, egg, and cheese quiche. It has a wonderful and rather unusual pastry crust that partners perfectly with the filling of smoked bacon, strong cheddar, serrano peppers, eggs, and heavy cream.

Our version of this French classic is so astonishingly good that it might banish any negative thoughts you may have about quiche. Forever.

I mention that due to some of the so-called quiches I’ve encountered in the past. They were bad imitations of the real thing, with their sadly soggy pastry crusts and fillings that didn’t taste of, well, anything, really.

Often served at picnics, these imposters would crumble apart in your hand and (thankfully) fall onto the grass and be deemed uneatable.

This one’s nothing at all like that. It’s a keeper, a quiche you can be proud of and will hopefully be keen to make and relish again and again.

To create the outstanding tastes in your quiche’s filling, it’s definitely worthwhile choosing your cheese and bacon with some care.

Your choice matters because the eggs and cream in the filling are great at mellowing other flavors. So, to compensate for the fact that they’re so effective at softening and rounding the character of their companion ingredients, you need to be using really full-flavored cheese and seriously tasty bacon.

Bearing that in mind, I used a rich, sharp, 18-month matured cheddar, and a well-fatted, rindless streaky (belly) bacon with a darkish pink color in the meat, and a strong, smoky aroma.

The secret to the outstanding pastry crust? It’s made with chickpea flour

This is a strong, easily made pastry that you don’t even have to roll.

It’s a simple mix of chickpea flour, butter, water, and salt. Once you’ve combined the ingredients into a ball of dough, you just press it into place in a fairly shallow, round baking dish.

This might be the quickest, easiest pastry I’ve ever made, but its texture makes it the perfect base for your quiche. It’s a robust pastry with plenty of body, so it’s not naturally absorbent. That means you won’t end up with a soggy base to your quiche. That’s the first big bonus.

The second bonus it that this pastry produces a firm crust around its edges that’s delightfully crisp but doesn’t fall apart as soon as you touch it.

And then there’s its flavor. The combo of chickpea flour and butter gives this pastry a meltingly rich nuttiness that works so well with the big, rich tastes of the filling.

There’s also a little trick that helps to prevent the pastry from turning soggy. Brush it lightly all over with some egg white, then bake the pastry in its dish for five minutes. This creates a slightly glazed seal on the pastry’s surface before you add the filling and finish baking your quiche.

I baked my mine until the exposed rim of the crust turned a dark golden color. I then let it cool to a little above room temperature before serving it. That pastry didn’t crack and crumble as I cut it, and the dark baking had given the rim a lovely crunch and boosted its nutty, buttery savor.

Just like the pastry, the serrano peppers make a big difference

Thinly sliced, fresh green serrano peppers bring in a gentle, bright burn to our quiche. Their heat is very obviously there, but it’s not at all dominating, and it doesn’t distract from the depth of the other flavors.

In fact, the serranos have the opposite effect. They highlight the richness of the cream and eggs, and they emphasize the contrasting flavors of the cheese and bacon.

Now, there are some people who think that quiche-making should follow a set of strict rules. They’d probably be a bit shocked by the presence of chili peppers. But in our quiche, they really accentuate the harmony between all of the filling’s bold flavors. Up The Scale Set II: Jalapeño, Habanero, Ghost Powders
Love bold spices? You'll love our Up The Scale spice pack that leads you right up the Scoville scale. Medium-heat jalapeño, extra-hot habanero, and super-hot ghost powders. All natural, 100% pepper, no additives.
Buy Now
Support PepperScale by purchasing our fiery spices. Subscribers get 15% off! 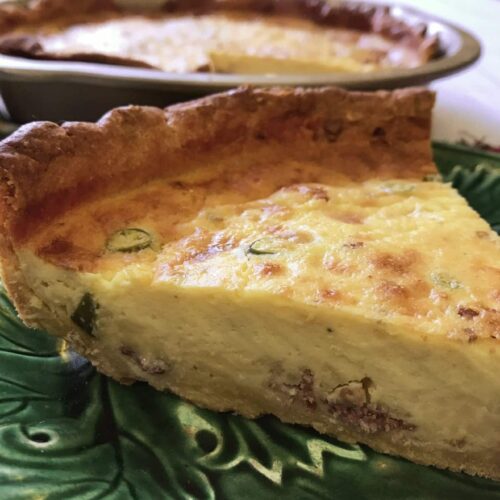 Filling, baking, and serving your quiche