In the magic of Indian cookery, spices are like the kiss from a fairytale princess. They turn ordinary things into royalty. In our aloo gobi recipe, their wizardry transforms potato and cauliflower into one of the world’s great curries.

Because it’s so popular across India and Pakistan — and everywhere else it’s enjoyed — aloo gobi has become one of those dishes that varies delightfully according to where you eat and who made it. It can be generously sauced or fairly dry, and anywhere from mild to hot

It’s grand when served as a side dish, but equally good as a main course with flatbreads or rice. That’s where it partners really well with relishes like a nicely potent lime pickle or mango chutney.

It’s also flexible and accommodating. You can tweak to your liking the amounts of spices you use. Maybe a little more cumin and cilantro. Maybe less of both. The same goes for the fenugreek, turmeric, garam masala, and freshly grated ginger.

And then there’s the chili. Without dramatically altering aloo gobi’s character, you can choose from a wide selection across the heat range. That’s because potatoes and cauliflower are so good at staying in the spotlight when there are chilies on the stage. In this recipe, I used green serrano peppers, but would be happy to swap them for, say, a little habanero or bird’s eye. It really depends on who you’re making it for.

Speaking of which, that’s another great thing about aloo gobi. It’s vegetarian. And, if you skip the butter that I love to use for melting down the onions and garlic — and, ahem, crowning the basmati — it’s also vegan. For dedicated meat-eaters, that means aloo gobi is a grand dish to serve to all your pals.

Choosing the potatoes and treating them right

This is about the only thing with aloo gobi curry where it’s wise to follow a couple of sensible rules. First, not too waxy, not too starchy. You want an all-purpose potato that fits somewhere in between. The potatoes need to keep their body and absorb just enough of the flavors from the spicy sauce.

Firm, waxy potatoes will tick that first box but not the second. And a floury, starchy potato will tend to fall apart and lose itself in the sauce. Middle ground is what you want — the sort of potato that’s just as grand mashed as it is front-and-centre in a fine potato salad.

And, rule number two, once they’ve been peeled and cubed, it pays to soak them for a little while in some cold water. This pulls out some surface starch and lets the chunks firm up a bit more. That’s dandy because it’ll cut any tendency to absorb the oil in which they first get fried hot and fast.

The tomatoes in our aloo gobi curry

For me, aloo gobi is such a great curry that I prefer to serve it as a main course — with buttery basmati rice. So, to create enough spicy sauce to pair happily with that divine rice, our recipe uses a couple of cans of tomatoes and their juice.

If you want to make your aloo gobi as a drier side dish to accompany something that’s already got plenty of its own sauce, use one can of tomatoes instead of two. 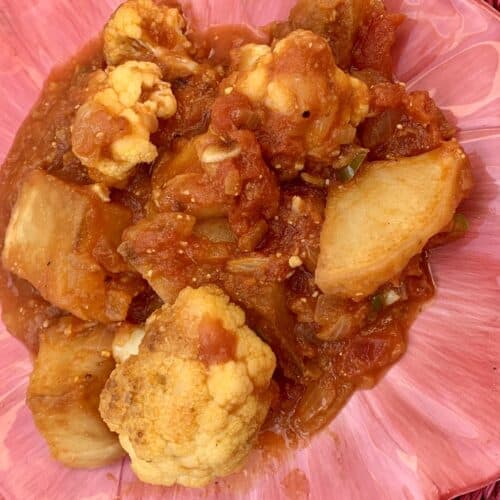 For the aloo gobi

For the aloo gobi

For the basmati rice

To drink? For this type of curry, the choice for me would always be a cold, light beer with just enough of a crisp bite to it. A couple of Heineken’s would be dandy. Thanks.

Keyword Serrano Pepper
Did you make this?Mention @PepperScale or tag #PepperScale so we can see what you made!
UPDATE NOTICE: This post was updated on May 19, 2021 to include new content. It was originally published on May 17, 2021.