With its snugly fitting, conical top and flat-bottomed, bowl-like base, a tagine is a sort of ceramic Dutch oven that’s widely used throughout North Africa. It’s also the name for the many types of stews — tagines — that are slowly cooked in a tagine.

Although Morocco has become renowned for this style of cooking, I really like this Algerian take on a tagine. Cooked in butter, olive oil, and that lovely dersa, the chicken and chickpeas are the stars of this dish. Unlike the Moroccan riff, there are no olives, preserved lemon, apricots, onions, or carrots to distract your appreciative attention away from the central players.

This tagine’s so appealing precisely because it shines the spotlight right on the chicken. For sure, there are some long slices of red bell pepper and brightly green zucchini, but they’re here for an attractive visual impact as much as their flavors. And it does all get served with couscous.

An oldie, but a goodie

And then there are the chickpeas. Sometimes tagged as garbanzo beans, they’re one of the world’s oldest cultivated crops, and were probably first ‘domesticated’ in south-west Turkey at least 8,000 years ago.

Because of their nutty and slightly earthy flavor, their popularity has certainly stood the taste of time. In Arabic, they’re called hummus, and when they’re mashed and mixed with sesame seed paste, tahina, you’ve got the basis for one of the very best dips around — hummus bi tahina.

Here, the chickpeas are left whole, and are added to the chicken once it’s almost cooked in its dersa-based sauce. This means they hold their body, and absorb a little of the sauce’s fiery flavor. But they still keep their own, distinctive taste and their creamy, ever so slightly grainy texture. And that makes for a grand contrast to the tenderness of the chicken.

In countries that border the Mediterranean in north-west Africa, couscous is a culinary cornerstone — just like rice is in, say, Chinese cuisine.

It’s made from the type of coarsely ground durum wheat — semolina — that’s mixed with water to create pasta dough. With couscous, the dough is formed into tiny beads, rather than being rolled into flat sheets and cut into all those familiar varieties of pasta.

Although it has a mild flavor that’s similar to pasta, couscous tastes noticeably nuttier, and those miniscule, grain-like beads are ideal for mopping up your tagine’s sauce.

And couscous comes with another happy bonus — it’s so easy to cook. Widely available in an ‘instant’ format, all you have to do is add boiling water, wait a few minutes and give the couscous a good, airy stir with a fork.

No tagine? No problem

Now, I know that a tagine is hardly a standard item in everyone’s kitchen. No matter. A cast-iron Dutch oven or casserole pot with a good lid and a sealing covering of silver foil will do the job perfectly well — and that’s exactly what I used.

I did, however, borrow a tagine from a kind friend, and I used that to serve the dish once it was cooked. It might have added nothing to our tagine’s flavors, but it did dress it up in the right sort of uniform for its dining table parade.

Aside from that touch of window-dressing, it’s just as good to present everything on a large, deepish, nicely warmed serving plate that’s easily big enough to hold all the couscous in a conical pile. The chicken and chickpeas then get neatly laid on top of it, and the zucchini and peppers are arranged in pleasant stripes around that central couscous mound. 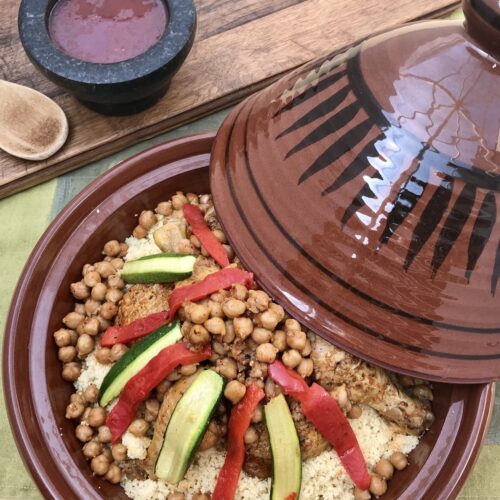 For the chicken and chickpeas

For the zucchini and red bell peppers

Cooking the chicken and the chickpeas

Cooking the zucchini and the peppers