“Don’t spoil it with cutlery. This is party pork!” That’s the advice from a beaming buddy of mine about adobo de chanco — slow braised pork shoulder, served with ladles of bread-dunking, fiery sauce, and buttered corn. “This Peruvian pork is for pure pleasure, please, fingers only.”

This is very much a case where the name of the dish just doesn’t do it anything like the justice it deserves. You could translate adobo de chanco to spicily marinated pork. But that gets nowhere near telling the whole, delicious story of this Peruvian pork classic.

In Peru, they have places called picanterias. These are eateries which specialize in serving food that’s ‘picante’ — the Spanish word for spicy. In picanterias, being spicy means being chili-powered hot. With a burn around the cayenne mark, the most popular heat-source comes from fresh, hot peppers known as aji amarillo, ‘yellow chili’. In its sun-dried form, this culinary mainstay is aji mirasol — a rather lovely name for a chili that’s been sun-gazing.

Now, I’ve never been to a picanteria, but adobo de chanco reveals a lot about why I’d really like to. Its big, robust, honest-to-goodness flavors sing a song about the happy, primal wonders of relishing simple, fine food among seriously good company.

This is a meal that combines gusto with bravura. It’s an accomplished ambassador for the delights of straightforward ingredients that are superbly showcased by uncomplicated cooking. And since the pork is the main event here, it’s definitely worth looking at the reasons why.

Shoulder, neck, Boston butt: now there’s a grand piece of pork — no matter what you call it

For adobo de chanco, what you’re looking for is the upper cut from a pork shoulder. Although this topmost section sometimes gets rather vaguely called shoulder or neck, a much more specific moniker is Boston butt. This is the cut that fans of pulled pork are probably most attracted to.

Shot through with marbling fat — which accounts for its big-hitting flavors — this grand piece of pork is rightly raved about for being at its gorgeously tender best when cooked fairly low-and-slow.

To cater for four good appetites, you’ll need a rindless, boneless, butt of around three-and-a-half pounds. This then gets cut into chunky sections that are each easily two-inches square — way beyond bite-size.

Here’s the beauty of prepping the pork like this. First off, those generous chunks suit being given some golden color in some hot pork fat / lard. That gets them ready for being slowly braised in a marinade-based adobo sauce that’s built around generous amounts of chili, garlic, red onions, oregano, cumin, cinnamon, cloves, black pepper, and an enlivening, flavor-focusing amount of red wine vinegar.

The adobo for the chanco

To be authentic, the principal liquid in the adobo should be a type of Peruvian beer called chicha de jora. Typically corn-based, it’s a fermented, sweetened brew that’s in a style that was much favored by the Incas — but has a history that goes back even further than those empire-building folk. It’s reckoned that this sort of beer has been brewed in the Andean region for 7 000 years.

Even though it’s been around for a while — and is still widely enjoyed in many parts of South America — it’s unlikely you’ll find any in other parts of the world. So, in our recipe I’ve gone for a substitute — a dry-ish, fruity kombucha, that I combined with more chicha-featuring cinnamon and cloves.

Over thousands of years, the aji amarillo has become woven into the fabric of Peru’s cuisine. It’s such an integral part of the country’s cooking that it’s often tagged as Peruvian pepper. And in a land of such chili-loving people, it’s hardly surprising that Peru is home to many chilies spanning a big range of flavors and potency.

One that particularly interested me is a chili with another long, long history behind it — the rocoto. What struck me as being unusual about this variety is that it grows at high altitudes — in the Andes, no less. Which means it doesn’t need the warm-to-hot sunny climes I’d always thought were essential for chilies to flourish. And although it looks a bit like a small-ish, red bell pepper, it can throw a habanero-style punch.

Rocotos are apparently mega popular in Peru. But, like other native varieties, they’re difficult to find elsewhere.

So, continuing in the spirit of needs-must substitutes, I used dried arbol chilies in the marinading mix and added fresh, thickly-sliced red cayennes to the sauce.

If you’re a fan of higher heat, then a few habaneros or scotch bonnets would be just dandy — especially since the adobo sauce has enough fruity sweetness to balance their intensity. 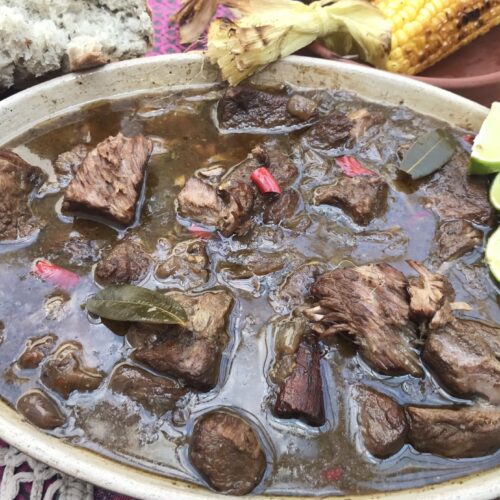 For the adobo sauce

Marinating the pork — 30 minutes is fine

Cooking the pork — a fast-fry first, then a slow braising

Serving your adobo de chanco — in large soup bowls, please I like to present the big pot at the table with a good size ladle alongside — so that folks can fill their own bowls. I offered it with a big, crusty loaf of olive ciabatta that generous hunks could be torn from. Remember, this is a dish that gains nothing from cutlery — the broken bread’s the only utensil you’ll need. Bearing that ‘fingers only’ advice in mind, I also served hotly-buttered corn cobs — 2 per person. And they’re strictly for eating with your fingers. Napkins all round? For sure!