This Mexican-style delight showcases the brisket’s intensely beefy flavor by pot-roasting the meat in a rich adobo sauce. Pasilla peppers give the adobado brisket (meaning adobo-spiced brisket) a deep, smoky heat spiced with cumin, cloves, and cinnamon and brightened with apple cider vinegar.

Long and slow. That’s the magic mantra for turning a good-sized piece of bone-in brisket into a wonderfully tender, full-flavored joint of beef. The bone-in cut I used was a fairly hefty six-pounder. It went into a big, tightly sealed, cast-iron pot with its adobo for four hours in an oven set at 340F / 170C. That’s what I mean by long and slow.

This sort of patient cooking locks in all the brisket’s flavors and gives them time to be enriched by the hot and smoky spiciness of the adobo.

It will also allow you to carve steak-like slices that are gorgeously grained, remarkably tender, and packed with the sort of big flavor you’d expect from a fine piece of sirloin or ribeye.

Now, brisket might not be widely regarded as the swankiest of beef cuts, but it outshines some that are, in terms of its flavor. It comes from a group of powerful muscles that sit above the front legs and support over half the animal’s weight. It’s a hard-working cut that requires some laid-back attention to bring out the very best in it.

Why choose bone-in brisket? I prefer it since the bones help conduct the low heat through the meat. And also because (and possibly more importantly) the bones add their own rich beefiness to the brisket’s flavor.

In addition to the pasilla chilies and spices, there are fresh red cayenne peppers, red onion, garlic, oregano, and bay leaves in our adobo. All these ingredients are used in generous quantities to create a cook-in sauce with a bold character that’s strong enough to match the big, distinctive flavors of the beef.

To provide a counterweight to the brisket’s rich fat content, the sauce gets its noticeably fruity, balancing tang from apple cider vinegar and the zest, flesh, and juice of a good-sized, tart orange.

Those acidic additions in what we now think of as adobo-style sauces were first used long ago for their preserving qualities – to keep meat fresher for longer.

The term “adobo” comes from a Spanish word for marinade, and it began its rise to widespread culinary fame some 400 years ago and the days when colonial Spain controlled the Philippines. From there, its Spanish-Filipino influence traveled to South America, eventually becoming particularly popular in Mexican cuisine.

Nowadays, vinegar and citrus feature far more for their flavors than as preservatives, similar to how we continue to savor the effects of smoking, brining, and pickling some foods.

And to serve alongside your adobado brisket? Rice, grilled corn cobs, or creamy mash would all be good. For me, those slices of beef pair perfectly with some very easily made but extra-special potatoes, so that’s the route I chose to go.

This is so simple to make that it has no business being so outstandingly good.

For a start, the prep is minimal. The medium-sized potatoes don’t need to be peeled. You just cut them into quarters and add them to a baking dish along with unpeeled baby onions, skin-on garlic cloves, olive oil, oregano, salt, and black pepper. Give the lot a good stir and cover the dish tightly with silver foil. That’s it. Your prep’s done.

As for the cooking, that’s about as straightforward as it gets. Just let the covered dish bake for an hour with the brisket in your low oven. During that time, the potatoes and onions will cook through in their steamy juices, and the garlic cloves will mellow considerably, turning to the consistency of thick, heavy cream inside their skins.

You’ll then give the uncovered dish some much higher heat for 20 minutes in the oven – to provide the potatoes with some darker golden color and a crisp finish to their outsides.

Adobado brisket with onion and garlic roasted potatoes. Serves four – probably with enough to spare for a few brisket sandwiches the next day. 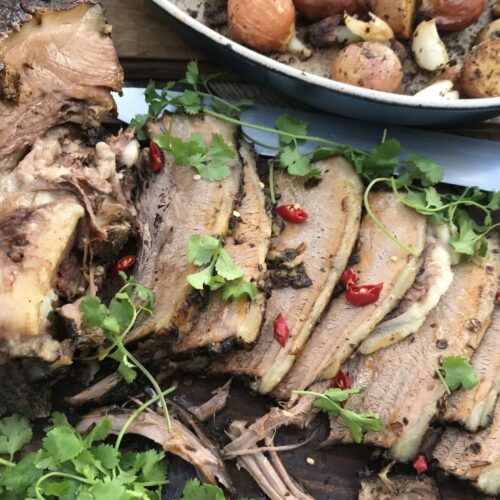 For the roasted potatoes